Shares in GE have underperformed for years as the market tries to understand the company's future. To that end, the company has made it known that it's getting back to its roots.

"When the facts change, I change my mind. What do you do, sir?"
-- John Maynard Keynes

General Electric (GE -2.98%) is an American institution. Founded by Thomas Edison, it's been in existence for over 100 years. However, with revenues approaching $150 billion and net income at $15 billion per year, it would appear the law of large numbers may be catching up with GE as revenue and earnings growth begin to slow. No surprisingly, shares in GE have underperformed for years, as the market tries to understand the company's future. Perhaps in an attempt to answer the markets desire for some clarity, the company has made it known that it's getting back to its roots. Can it be that GE is finally a buy post-reorganization?

World leader in infrastructure and industrial equipment
GE sells in 175 countries, with 22 of those countries generating revenues of more than $1 billion. It brings in almost $150 billion in revenue and free cash flow of around $14 billion. In its most recent quarter, industrial profit grew 27%. It's a major supplier to the healthcare, transportation, and energy industries. And with its leading market position, GE is well positioned to take advantage of global new equipment and services demand. 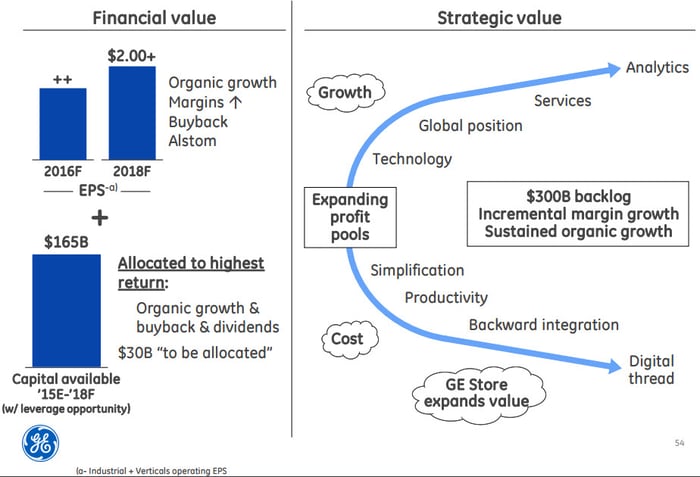 The primary driver of shareholder value over the long term will certainly be the industrial equipment and services segment. The services segment in particular has a backlog of $210 billion ($300 billion total backlog). R&D investment accounts for 2.8% of revenues at $4.2 billion, and the U.S. represents the majority of revenue at 48%, while Asia and Europe account for 32%.

Divestitures of non-core assets
GE continues to offload non-core assets at reasonable prices. Recently, it completed the spinoff of Synchrony Financial (SYF -3.47%) as it restructures the company back into an industrial business. The transaction removed 6.6% of GE's share count, or $20.4 billion. Just a few days ago, the company announced that it will sell its appliances business to China's Haier for $5.4 billion. These were great companies, but they didn't fit GE's core focus and strength. GE also didn't like its competitive market position in those industries. These divestitures will create a leaner and more flexible business for the long term and will help to position GE as a high-value, multi-business industrial company.

Moreover, GE almost went under at the depth of the financial crisis because of GE Capital. Before the spinoff, assets under GE Capital swelled to about $500 billion, which made GE Capital the seventh largest bank in the United States. Its size classified it as a systematically important financial institution under the Financial Stability Oversight Council (FSOC), which opened it to increased restrictions and oversights that limited it from operating at an optimized level and led to a challenging regulatory environment.

Essentially, the only part of GE Capital that will remain will be operations tied directly to the Industrial side of the business.

Here's an idea of how GE Capital will look going forward: 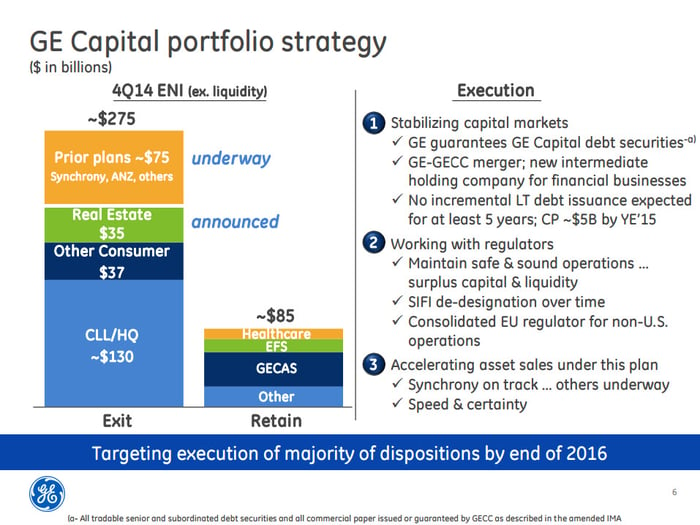 Back to its roots
GE has taken significant steps toward becoming more focused as an infrastructure and industrial machine leader to decrease its risk profile. 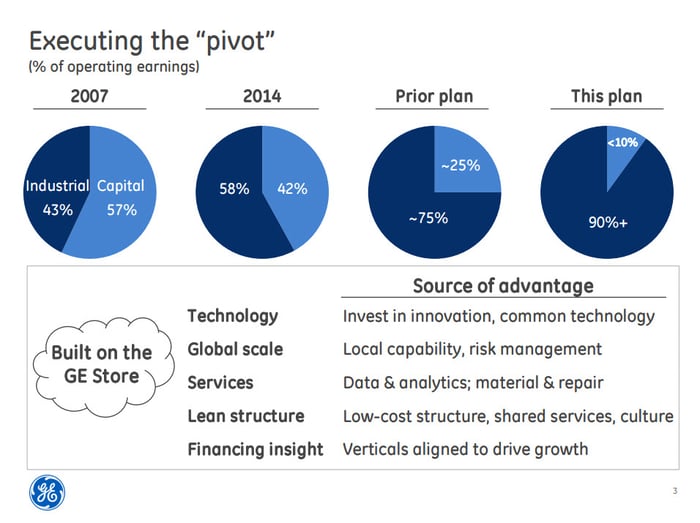 Here's what the future of GE will look like from an operational standpoint as an industrial company by 2018: 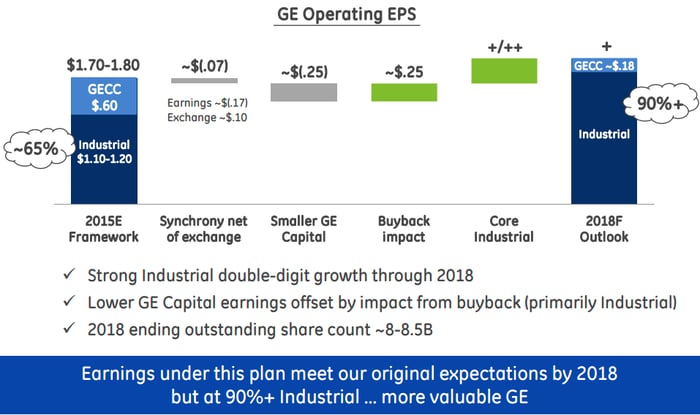 Shareholder-friendly management team
By 2018, management intends to be growing earnings per share, returning more than $90 billion to investors, increasing margins and profits, and achieving 75% of earnings from industrial businesses. The team is committed to this vision and believes it will lead to a much higher valuation over time. Management has proved itself to be an adequate capital allocator and extremely shareholder friendly, and I expect this trend to continue as the company returns to a more focused industrial business. 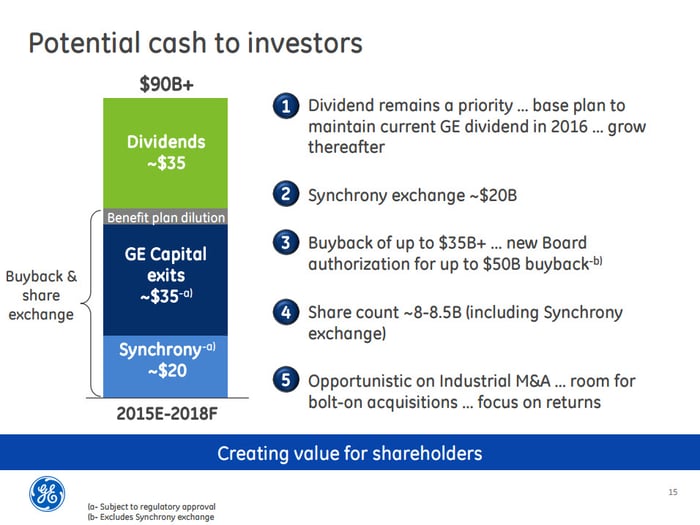 Since the Great Recession, Jeffrey Immelt has built an incredible platform for teamwork, innovation, and focus at GE. It's operating in a leaner capacity, and this new focus should help set the stage for increased valuation and shareholder value over the long term.

What to expect next
I understand investor contempt toward GE, given its 15 years of underperformance. However, we're entering a new era for GE. I believe investors should do very well at current levels over the long term, with a free cash yield of 5% and a dividend yield of 3.81%. In the next two to three years, shareholders will see tremendous amounts of capital returned to them in the form of share buybacks, dividends, and spinoffs. At the end of this process, investors are likely to get a better focused, leaner business with a much lower risk profile. The high-return industrial business lines, which will comprise 90% of GE by 2018, should provide increased shareholder value via increased focus and world-class competitive advantages.

Bottom line
GE operates in the cyclical, capital-intensive industrial complex. Many argue that bigger is better, but massive conglomerates have had a difficult time over the years proving their value to shareholders the value. We've seen it with ITT, Gulf & Western, LTV, and Litton Industries in the past. And more recently, we see it in Loews (L -0.39%) and Leucadia National (JEF -2.49%). Sometimes smaller is better for investors, if a company is better able to focus on the things it does best.

The bottom line? GE shares offer an attractive opportunity to own a company with consistent growth in a volatile world, deep competitive advantages, and a healthy dividend yield at a reasonable price. Not only is GE a buy post-reorg, but it's also a buy right now.