Please ensure Javascript is enabled for purposes of website accessibility
Log In Help Join The Motley Fool
Free Article Join Over 1 Million Premium Members And Get More In-Depth Stock Guidance and Research
By George Budwell - Feb 9, 2016 at 9:05AM

Celgene took a bath in January, and not just because the market was shying away from all things biotech. 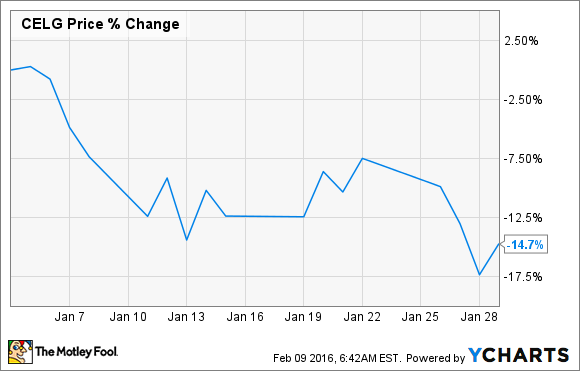 What: The blue-chip biotech Celgene Corp. (CELG) lost nearly 15% of its value last month, according to data provided by S&P Global Market Intelligence. Celgene's stock was walloped by the changing market sentiment toward biotechs in general, a disappointing annual outlook issued by management to kick off the month, and finally, a rare fourth-quarter earnings miss to end the month.

So what: In many ways, Celgene is a bellwether stock for the whole biotech industry. Not only is it a major component of the iShares Nasdaq Biotechnology ETF (IBB 0.39%), but investors have tended to look toward this particular name as a key pacesetter in terms of revenue growth and innovation.

After all, Celgene has a strong track record of generating top-line growth in excess of 20% per year, and the company has successfully expanded the labels of its core cancer drugs Revlimid and Abraxane over the years.

With Revlimid's sales starting to cool off to some degree and rising R&D costs taking a toll on its bottom-line in the fourth quarter, biotech investors seemed to think it was time to start moving to the sidelines -- causing Celgene's shares and the IBB to head lower in January.

Now what: Celgene has historically sported one of the highest premiums among large-cap biotechs, as evidenced by its 12-month, trailing price-to-earnings ratio of 51. Unfortunately, the market seems to be signaling that it's no longer willing to pay such stately premiums -- even for companies generating industry-leading levels of revenue growth like Celgene.

The cold, hard truth is that the market is shrouded in fear at the moment because of the strong dollar, the downturn in China, and the U.S. presidential election. That's why Celgene and the broader IBB ETF may struggle to break out of their funk in 2016.

The good news is that Celgene has a stellar clinical pipeline, chock-full of potential blockbusters  spanning a diversity of indications. So, once these current headwinds fade away, this biotech should be poised to return to its winning ways, making it a great stock to own for the long haul.