Please ensure Javascript is enabled for purposes of website accessibility
Log In Help Join The Motley Fool
Free Article Join Over 1 Million Premium Members And Get More In-Depth Stock Guidance and Research
By Adam Galas - Feb 9, 2016 at 7:55AM

Learn why Valero Energy Partners is able to defy the worst oil crash in 50 years and why investors can likely expect fantastic payout growth over the next two years.

With few exceptions the worst oil crash in half a decade has taken a toll on almost all energy stocks, even those once thought impervious to commodity prices, such as midstream MLPs. One such exception so far, though, is Valero Energy Partners (NYSE: VLP), which just announced stupendous Q4 and 2015 earnings results.

Find out just how good they were, why dividend lovers can anticipate distribution growth over the next two years, and what risks they need to look out for.

Results don't come much better than this

Further good news came from management's announcement that it had secured an expansion of its revolving credit facility from $300 million to $750 million. This provides the MLP with $656 million in total liquidity with which to continue acquiring Valero Energy Corp's. midstream assets in 2016. Better yet, thanks to a leverage ratio (debt/EBITDA) of just 1.1 times compared to the industry average of 6.2, Valero Energy Partners should have little trouble accessing additional cheap debt markets.

Payout profile that's the envy of its peers
One of the most important things dividend investors need to consider when investing in midstream MLPs is the distribution profile, which consists of three things: yield, payout sustainability, and long-term distribution growth potential.

While Valero Energy Partners' yield is far below the average midstream MLP yield of 7.9%,in all other respects its distribution profile is exceptional, which explains why Wall Street is valuing it at such a premium to its competitors.

However, as fellow midstream MLP growth superstar MPLX (NYSE: MPLX) recently showed, when management cut 2016 payout growth guidance in half on Feb. 3 -- very strong payout growth expectations can be a double edged sword if an MLP is forced to lower them. 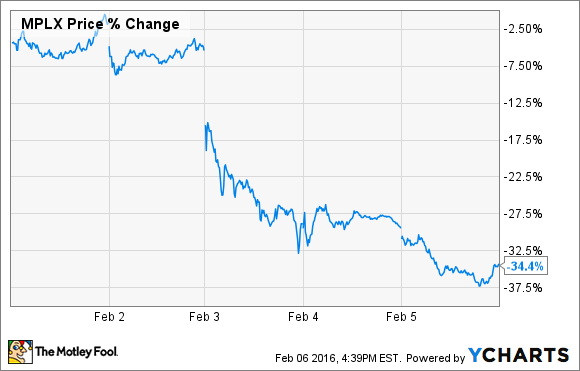 Luckily for Valero Energy Partners, MPLX's reasons for slashing its distribution growth forecast was due to its recent acquisition of MarkWest Energy Partners, which exposed it to declining gas production volumes in the Marcellus and Utica shale.

Valero Energy Partners' volumes come from Valero Energy Corps.' use of its assets (all of which are under long-term fixed-fee contracts), which means very little volume or revenue risk to potentially cause it to miss its payout growth target.

In addition MPLX had to take on $4.1 billion in debt as part of that acquisition, resulting in a 4.7 leverage ratio that management is trying to lower to 4.0 by year's end. This limits the amount that MLP can borrow to fund future growth, a problem not currently shared by Valero Energy Partners' with its super clean balance sheet.

BUT super growth runway may be a short one
While Valero Energy Partners' growth in 2015 was impressive, there is one major concern I have that investors need to be aware of. 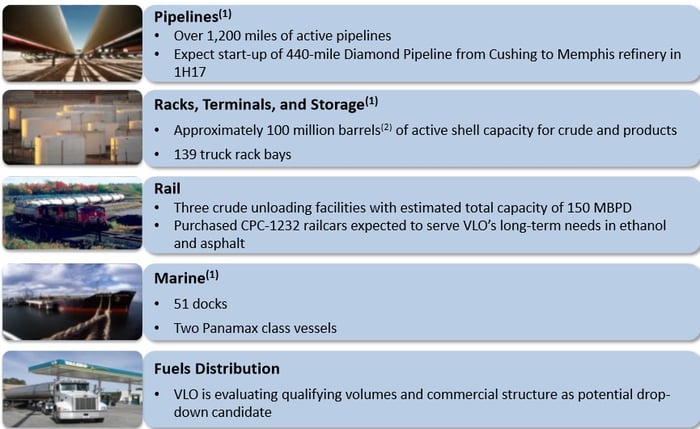 Valero Energy Corp.'s existing midstream assets may provide the still small Valero Energy Partners' several years of exceptional growth, the sheer magnitude of those assets are much smaller than other refiners, such as Phillips 66, Marathon Petroleum, and Royal Dutch Shell, all of which also sponsor fast growing midstream MLPs.

In 2016 Valero Energy Corp. plans to invest $715 million into midstream assets, which means its MLP is getting some more room to grow through dropdowns from its sponsor.However, with Valero Energy Partners' projecting just $5 million in organic growth expansion in 2016, investors need to understand that this MLP's dependence on acquisitions means its hypergrowth is less likely to contine.

Bottom line
With billions of dollars of additional midstream dropdowns coming from Valero Energy Corp, stupendous access to growth capital, and one of the strongest coverage ratios in the industry, I believe it's highly likely that Valero Energy Partners will hit its 25% payout growth target over the next two years.

However, it's important for investors' to realize that Valero Energy Partners' is currently trading at a very high premium, especially relative to its beaten down midstream peers. Once its sponsor's dropdown pipeline is empty, payout growth will likely have to slow substantially.