Ford struggled to gain market share in China in 2015, as it fought against a rising tide of new products from local Chinese automakers. But its profits jumped anyway -- and Ford's CFO told us why.

Why did Ford do so well in China in the fourth quarter? A three-row version of Ford's new Edge SUV had a lot to do with it. Image source: Ford Motor Company.

Ford's (F 0.86%) "Asia Pacific" regional business unit made $765 million last year. A big chunk of that came in the fourth quarter, when Ford reported a $444 million profit in the region, up from just $95 million in the year-ago quarter.

That fourth-quarter gain happened despite a significant slowdown in the region's (and world's) largest new-car market, China -- and despite the fact that Ford's China market share was flat year over year.

How did the Blue Oval pull that off?

How China is driving Ford's Asia Pacific results
First off, we need to understand that Ford Asia Pacific includes a lot more than China -- but right now, at least, China is where the profits are coming from.

You can see that in this slide from Ford's fourth-quarter earnings presentation. That $444 million profit included $490 million in equity income from Ford's two joint ventures in China. (Yes, Ford took a loss on the rest of the Asia Pacific region, as it's still ramping up production in places like India, on the heels of its $5 billion Asian expansion effort.) 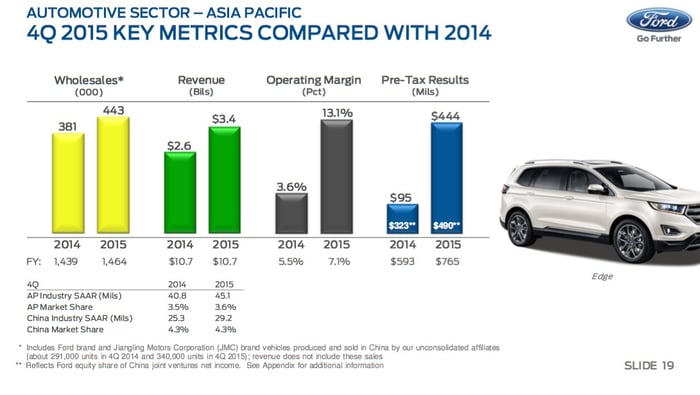 You can see that $490 million in equity income is up 52% from the $323 million it earned a year ago. But you'll also note that Ford's market share in China was flat year over year.

How Ford boosted profits when it couldn't boost market share
Given Ford's strategy of expanding into interior Chinese cities where other Western auto brands don't yet have a big presence, it seemed like Ford should have been set for more market-share gains in 2015. I asked Ford's chief financial officer, Bob Shanks, to explain.

Part of the challenge Ford is facing is that the locals have stepped up the competition. Shanks said:

Throughout the course of the year, we had a lot of new product entries in the mainly utility -- B-size utility segment coming from domestic manufacturers, the indigenous [Chinese] brands. Their pricing is positioned generally below the international brands like ourselves, and they've really resonated particularly in the [smaller] cities. I don't know how sustainable it will be, but it certainly has had an effect on the overall share of domestics versus international brands, and we've been among that mix.

But Shanks pointed out that, despite the challenges in gaining market share, Ford has had success with some profitable new products.

In the fourth quarter, we launched the Edge, and that is a very hot product. It's the three-row Edge, as opposed to the two-row Edge that we have [in the U.S.]. It has been extremely well received, we can't build enough of them, and it has a very high [profit] margin. 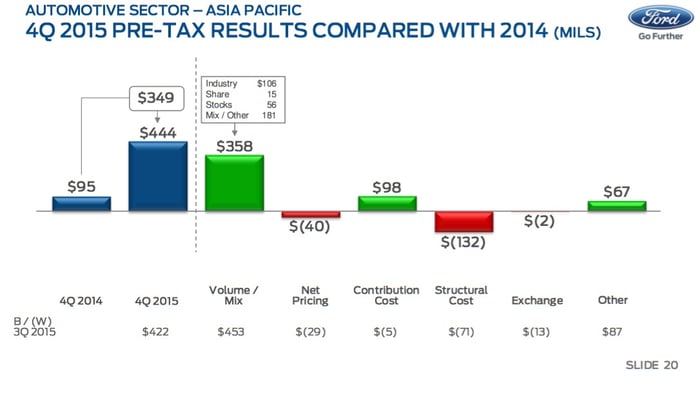 When you look at the details of what's behind [Ford's profit gain], it includes a very strong 'mix' factor which is about twice the actual benefit that's shown. You see a "Mix/Other" of $181 [million]. But $355 [million] of that is mix, and a good portion of that is the Edge -- not just the Edge, but also the Mondeo and the Kuga.

The upshot: As in the U.S., Ford's newest products are driving profit gains
The "Mondeo" and "Kuga" that Shanks mentioned are the China-market versions of the Fusion sedan and Escape SUV, respectively. The Edge is just like the new-for-2016 Edge that Ford is selling here, except that in China, it's also offered in a longer-wheelbase version that seats seven people in three rows.

For shareholders who might be unnerved by the recent sell-off of auto stocks, it's one more sign that Ford is on the right track -- regardless of short-term investor sentiment.