So far, this earnings season has proven to be one of the worst in recent memory for Big Oil companies. For Royal Dutch Shell (NYSE:RDS.A) (NYSE:RDS.B) it may not have been as bad as last quarter's $7.4 billion loss, but it certainly wasn't an impressive earnings report either. Let's take a quick look at the numbers as well as what investors should really keep in mind when evaluating Shell for their own portfolios right now.

By the numbers
Unlike last quarter where Shell's management decided to take some huge charges to the income statement and write down assets, this past quarter was probably the closest we see the reported earnings as a relatively accurate representation of the quarter. Total net income for the quarter came in at $939 million which, surprisingly, was an improvement over the same quarter last year where earnings came in at $595 million. One thing to consider, though, is that last year the company took a $3.6 billion adjustment for the current cost of supplies. Looking at the operational profits, this quarters' $1.82 billion is a 44% decline from the same quarter last year.

Unlike the last couple quarters where refining and chemical earnings helped to give overall profits a boost, these two segments weren't as robust as previous quarters. Some of it has to do with lower refining margins and lower prices for commodity chemicals. 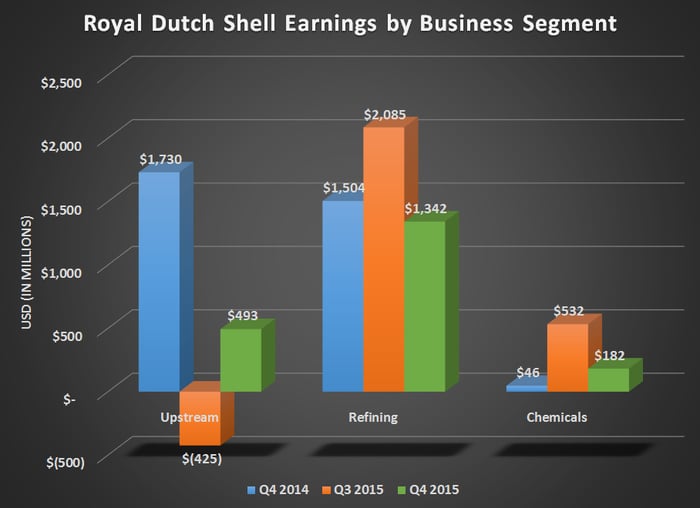 The one surprising element here is that Shell was able to remain profitable on the upstream side of the business. Its Americas segment continued to struggle with a loss of $1.1 billion for the quarter, but improved results in Europe, Asia, and Oceania helped to pull upstream earnings out of the red. Some of that can be attributed to foreign exchange benefits, but the company also saw some large projects start up in these regions such as the Corrib gas field in the North Sea and the gas injection facilities for its Gumusut Kakap deepwater station.

On a cash flow basis, this quarter was not quite as robust as the prior one. Total cash from operations this past quarter came in at just $5.4 billion, a 44% reduction from last year. For the year, Shell was able to cover all of its spending with cash from operations, but just barely. If you count the $4.7 billion in asset sales for the year toward the company's cash, Shell still wasn't able to meet all of its cash needs for capital spending and its dividend.

That is why investors should be so pleased with Shell's scrip dividend. Thanks to shareholders taking new shares in the company in lieu of cash, Shell was able to pay $1.2 billion less of its $3 billion in dividend payments. If this scrip dividend program holds at these levels, it could lead to close to $5 billion in cash savings for the year.

The big picture: BG Group plan goes full steam ahead
This quarter was a bit of a wait-and-see quarter for the company because it will be the last one before the results from recently acquired BG Group comes into the fold. Now that the merger is approved, investors can turn their attention toward how the integration of the two companies unfolds and how it can eke out operational efficiencies and cost savings. According to management, it will be able to reduce operating costs of the combined entity by 15% while also reducing its total spend for 2016. 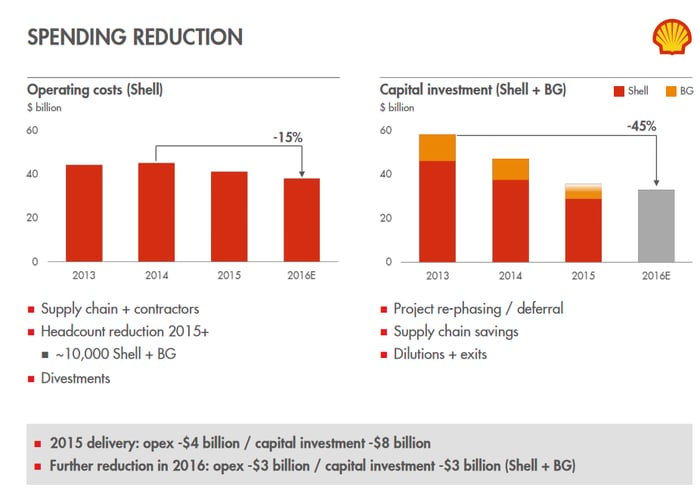 So throughout the rest of the year, investors should watch to see if the company can meet these goals. This is just one of the things that Shell has planned now that it has combined with BG, so this one could be an early indicator as to how it will be able to handle some of its more ambitious plans like its $30 billion in planned asset sales over the next two years.

What a Fool believes
Just like last quarter when Shell looked to be prepping itself for the merger by shedding itself of its unprofitable ventures, we're still not completely certain what the company will look like as a combined entity. Once we start to see the wheels hit the road, then we can get a better gauge as to whether the BG Group acquisition was the right move. Until that happens, though, it's probably best to sit on the sidelines for this one.