The home care and beauty products company's stock bounced back, but that doesn't mean its business is going to.

What: Shares of Avon Products (AVP) are up 21% on Feb. 12 at 12:30 p.m. ET, just one day after falling 23% on the day of its fourth-quarter earnings release. Even though it has recovered most of those losses, Avon Products' stock has been in a steady free-fall for years: 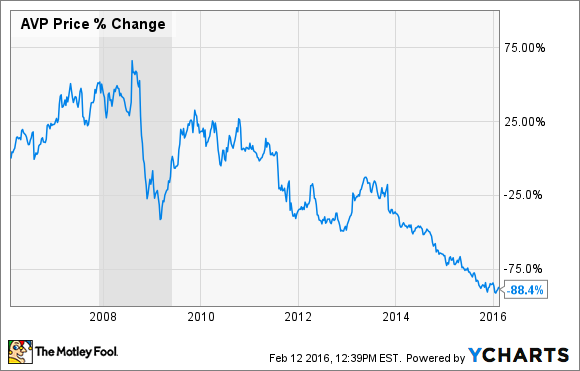 So what: The decline in shares on Thursday was precipitated by another quarter of declining sales, with Avon reporting that revenue fell 20% to $1.6 billion in the fourth quarter. The company also announced operating profit fell as well, to $63 million, and operating margin percent fell more than half, to 3.9%.

Foreign currency exchange is playing a major role in the company's top-line results. In its earnings release, the company said that in constant currency, and excluding a recent divestiture, net sales were actually up 3%. Furthermore, the company entered into an agreement in December to sell 80.1% of its North America business, and reported those revenue and expense items in its "discontinued operations" line.

In other words, currency exchange will continue to play a big role in the company's results going forward.

Now what: The move to divest the North America business probably makes sense, as it will allow management to focus on expansion in developing markets, but it's not very clear that the company's success in building its brand for many years in the U.S. will work the same way internationally.

The bottom line is, Avon's historically successful model of individual salespeople going door to door, and selling cosmetics and home goods to friends, neighbors, and family, has struggled in recent years. Yes, the company is investing in technology in an attempt to modernize its approach, but the reality is, it's unclear if there is enough brand power behind the Avon name to let its social media and other tech-focused selling efforts pay off.

Avon may look like a bargain stock today, even after the bounce-back in its share price, but the reality is, it has been a business in decline for years: 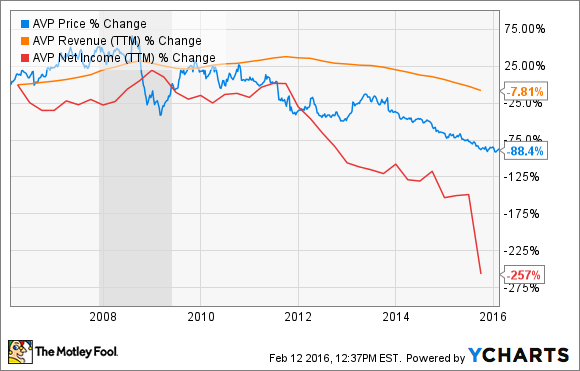 There's a chance that management's efforts at a turnaround could pay off, but there are a lot of companies with strong growth prospects on sale right now. Better to invest there than count on a turnaround that may not materialize.