Pfizer, WebMD, and Celgene have what it takes to make for a lasting relationship with investors.

Investing is a long-term commitment, and that means you need to focus most on stocks you'd like to stick with through thick and thin. I think Pfizer (PFE -1.75%), WebMD Health Corp. (WBMD), and Celgene Corp. (CELG) are the kind of investments you wouldn't regret marrying. Here's why.

No. 1: Pfizer
When its top-selling Lipitor lost patent protection in 2011, Pfizer's sales dropped more than $15 billion to below $50 billion last year. That's painful, but I think Pfizer's learned a lot from its experience with Lipitor, and the changes that management has made make me feel confident that the company is set up to deliver years of dividend friendly top- and bottom-line growth.

In fact, management recently forecast that its sales will increase this year for the first time in years, and that its profit will tick higher, too. In 2016, the company thinks revenue will be at least $51.3 billion, and EPS will be at least $2.36 at last year's currency exchange rates, or at least $49 billion and $2.20, respectively, at January's currency exchange rates. Regardless, both figures match up favorably to the $48.9 billion in sales and $2.20 in EPS the company made last year.

Pfizer's turnaround is thanks to its acquisition of the specialty drug and biosimilars leader Hospira, growing sales for its recently launched drugs, and cost cuts that have shrunk its SG&A by about $4 billion. Assuming those catalysts continue paying off, there should be plenty of money to reward investors with future dividend increases, and that's something everyone can like.

No. 2: WebMD Health Corp.
Content is king, and in that context, a flood of baby boomers who are entering their golden years should make healthcare content especially valuable.

If so, then few companies are poised to benefit as much as WebMD. The company's family of content sites, including WebMD, Medscape, and MedicineNet, are among the most visited healthcare information websites in the U.S., and as a result, advertising sales are growing -- and should continue to grow -- as the graying of America leads more people to seek out information about their illnesses and injuries.

With a strong track record of growing sales and profit and demographic tailwinds supporting it, I think WebMD can remain an attractive investment for years to come. 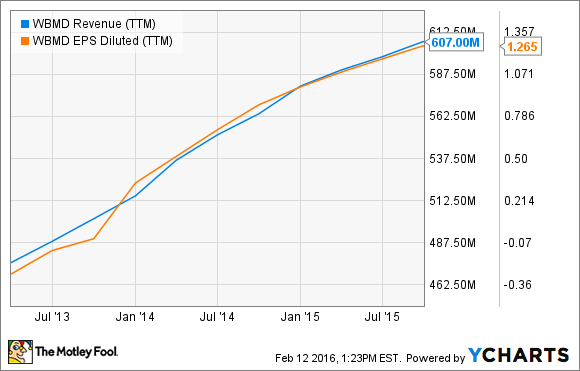 No. 3: Celgene Corp.
A lot of my love for Celgene stems from its first-class drug lineup, but before I get into that, I want to highlight some numbers:

The first number is Celgene's forecast for sales in 2020. What makes that projection impressive is that it represents a more than doubling in the company's sales from where they sit today. The second number is the enviable amount of cash the company has on hand, and the third number is the company's arguably cheap forward price-to-earnings ratio.

Given that sales are potentially doubling, cash on hand offers significant financial flexibility, and valuation is in bargain-bin territory, there's not much for me to dislike about Celgene. I suppose the biggest knock against the company would be its reliance on Revlimid, its top-selling multiple myeloma therapy. Revlimid has been around since 2005, so it's getting a bit long in the tooth, and it accounts for 61% of Celgene's quarterly sales, which is worrisome.

However, Revlimid sales are still growing by double-digit percentages, its patents protect it in the U.S. until 2027, and Celgene is branching out to other indications via its blockbuster drugs in pancreatic cancer and psoriasis. Celgene has an attractive multiple sclerosis drug in the wings thanks to its purchase of Receptos last summer, too.

Overall, Celgene's track record, forecast, and valuation make it the one healthcare stock I absolutely adore.

Todd Campbell owns shares of Celgene. Todd owns E.B. Capital Markets, LLC. E.B. Capital's clients may have positions in the companies mentioned. The Motley Fool owns shares of and recommends Celgene. Try any of our Foolish newsletter services free for 30 days. We Fools may not all hold the same opinions, but we all believe that considering a diverse range of insights makes us better investors. The Motley Fool has a disclosure policy.