Please ensure Javascript is enabled for purposes of website accessibility
Log In Help Join The Motley Fool
Free Article Join Over 1 Million Premium Members And Get More In-Depth Stock Guidance and Research
By Travis Hoium - Feb 14, 2016 at 9:00AM

Elon Musk has lost nearly half the value in his two public companies in 2016 alone.

Slower than expected installations of solar panels has hurt Elon Musk's net worth in 2016. Image: SolarCity.

2016 hasn't been a great year for Elon Musk and his public companies. Shares of SolarCity (SCTY.DL) and Tesla Motors (TSLA -0.23%) have fallen sharply as both have disappointed on growth and investors started to question his ability to meet his own plans to change the world.

The impact on Musk's net worth has been incredible. Nearly half of his net worth, at least the portion tied to these businesses, has vanished in just over a month.

Notice that I took out $475 million in personal loans that have Tesla Motors shares as collateral. This effectively lowers Musk's net worth and since it was used, in part, to buy shares it's worth pulling out of his value calculation.

All is not well in Musk world
The problem in 2016 has been almost opposite of the tailwinds Musk used to build a multi-billion dollar net worth. Since SolarCity and Tesla Motors went public they were high growth companies and investors gave him the benefit of the doubt that they would eventually make money.

Questions about growth in the market generally have gone up in 2016 and that has combined with Musk missing his own growth targets at SolarCity and Tesla Motors to hurt the stocks. The benefit of the doubt that Musk used to build his wealth has begun to evaporate.

You can see below that both companies are losing money and that can only be sustained for so long if stock prices are going to remain as high as they were at the end of 2015. 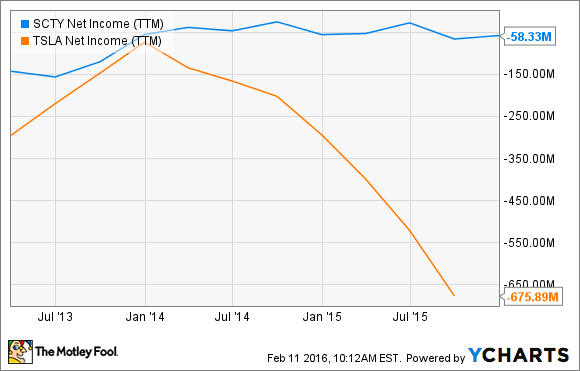 The question is whether or not either will be able to become profitable or even cash flow breakeven in the near future?

What to watch in 2016
During the earnings reports for both SolarCity and Tesla Motors this week, there was one consistent message. Both companies expect to be cash flow breakeven by the end of 2016.

That would be huge news if it comes true and could restore investors' faith in the companies. But remember that SolarCity has missed its own installation guidance two quarters in a row and Tesla Motors has missed its initial production guidance for two straight  years. Musk's track record of meeting his own expectations is abysmal.

Until Elon Musk can prove that both companies are built to sustainably generate cash flow quarter after quarter I think the up and down movements of their respective share prices will continue. And until I see that sustainability, I'll stay on the sidelines with my money.