Think you know the story? You might know part of it. Here's the rest, straight from the Blue Oval's chief financial officer.

Big sales of SUVs, including the new Ford Edge, helped boost the Blue Oval's profit last year. But there was more to the story. Image source: Ford Motor Company.

Most Ford shareholders know the general story. A year ago, Ford was spending big money to roll out the all-new F-150 pickup and other new products, while now it's starting to reap the profit gains generated from those new vehicles.

But what exactly drove that gain? And what held it back from an even bigger gain?

Ford's explanation of how it boosted profits in 2015
It turns out that Ford CFO Bob Shanks explained that in some detail; check out this slide from Ford's 2015 earnings presentation last month. 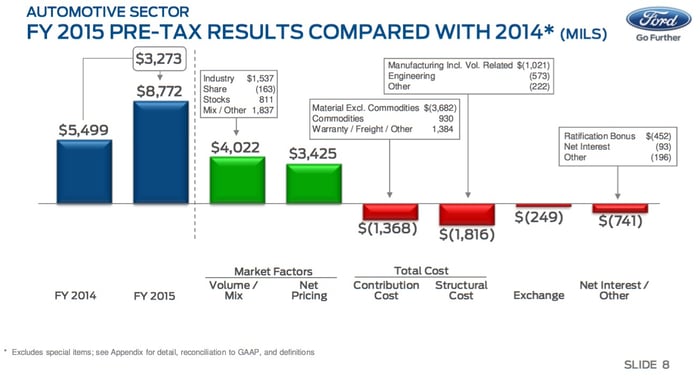 This slide looks at how Ford's pre-tax profits in 2015 compare with 2014, and it calls out the key factors responsible for the difference. Slides like this are sometimes referred to as "walks," because they "walk" the viewer from the prior result to the current result.

So, what does this one tell us?

Sales and prices rose last year, and that was good for over $7 billion in gains...
First, we can see that Ford got about $7.4 billion in gains from "market factors": It sold more vehicles, and it made more money on the average sale.

Ford attributed $1.537 billion of those gains to "industry," meaning Ford benefited from the industrywide increase in new-car sales around the world to the tune of $1.537 billion. Ford's small year-over-year drop in global market share cost it $163 million.

But what's "stocks"? CFO Bob Shanks told me that that represents the number of vehicles that Ford produced to boost dealers' inventories around the world. At the end of 2014, Ford's supplies of pickups in the U.S. were tight because it was just beginning the process of rolling out the all-new 2015 F-150.

The story is similar with "mix": Ford's all-new products can be sold with fewer discounts than the models they replaced, so they generate more profits per sale. In addition, Ford is selling more pickups and SUVs (higher profit) relative to sedans (lower profit), and more buyers are opting for higher-trim (and higher-profit) models. That in turn gave Ford a big "pricing" boost by raising its average transaction prices year over year.

...but those sales gains came with cost increases
Ford got $7.4 billion in gains from selling more and more profitable vehicles, but its pre-tax profits rose by just $3.273 billion. The slide tells us that it lost a bit of ground ($249 million) on exchange-rate swings, $93 million in interest payments, and $452 million in the "ratification bonus" it paid to its hourly workers in the U.S. after they ratified a new four-year labor agreement.

But the big hits came from cost increases: $1.368 billion in "contribution cost" and $1.816 billion in "structural cost." What's that mean?

The biggest item in there is a $3.682 billion hit for "material excluding commodities." Shanks told me it's essentially investments in improving products: "It's investments and product costs, but also what we call 'base design,' making the product just better across the board," he said. "We've got price-related cost in there as well, for those features that bring [improved] pricing."

Here's an example: For the 2016 model year, Ford added a new top-of-the-line "Limited" trim to its F-150 pickups. That will help boost overall average transaction prices on the F-150. But Ford had to pay to develop that package, to design and order the parts for the added options, and to set up its assembly line to build the Limited-trim trucks. Those costs were part of that "material" cost.

Shanks said there were also "regulatory" costs, meaning Ford is doing the development work to ensure that its vehicles meet upcoming new regulations.

The other big cost holding back Ford's 2015 profit was an item under "structural cost" titled "Manufacturing Including Volume-Related," $1.021 billion. That reflects the costs to Ford of increasing its production volume of existing models to meet surges in market demand. That's primarily added labor costs for extra work shifts and the need to have more parts in its factories' inventories and so forth.

The key thing to remember is that Ford doesn't regard those costs as "fixed" because they can be ratcheted back down if market conditions change.

Long story short: Ford (carefully) spent money to make (more) money
Now having walked through that slide, we might sum up Ford's 2015 profit story a little differently. It sold a lot more cars and trucks, and it's moving to boost the profit it makes on each sale -- but increasing production and making those improvements to the products came with costs that partially offset the gains.

For investors, here's the takeaway: Ford is making investments to make the most of current market conditions without significantly increasing the fixed costs it will have to pay during the next economic downturn. We like that.