Please ensure Javascript is enabled for purposes of website accessibility
Log In Help Join The Motley Fool
Free Article Join Over 1 Million Premium Members And Get More In-Depth Stock Guidance and Research
By Jason Hall – Feb 17, 2016 at 6:20AM

A revitalized approach under a new CEO has Tile Shop delivering excellent results.

When CEO Chris Homeister took over as CEO of Tile Shop Holdings (NASDAQ: TTS) to start 2015, the specialty tile retailer was dealing with a number of issues. Expenses were increasing faster than sales, comparable-store sales growth had slowed, and the overhang from a number of scandals under co-founder and former CEO Bob Rucker.

When Homeister, a former Best Buy executive, took the reins one year ago, there was much uncertainty that he would be able to right the ship. And while it's only one year into his tenure, the 2015 results are certainly a step in the right direction and an improvement from the year before. Here's a closer look at the results and what's driving them.

A significant portion of Tile Shop's sales growth in 2015 was driven by comps growth, while essentially all of 2014's sales growth was from new store openings. As a result of not getting more operating leverage from its existing stores, Tile Shop's gross margins were falling, expenses were climbing faster than sales, and the company had taken on a fairly large amount of debt in the years leading up to 2015: 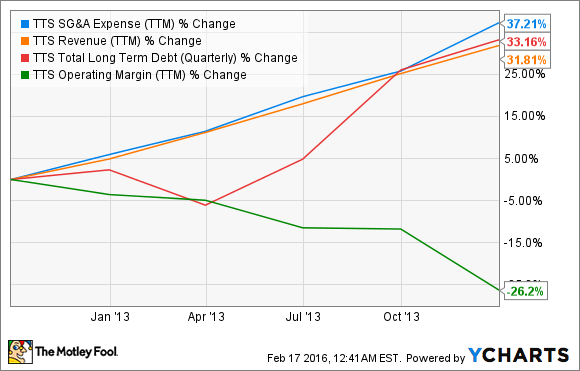 The company reversed course in all of those areas in 2015: 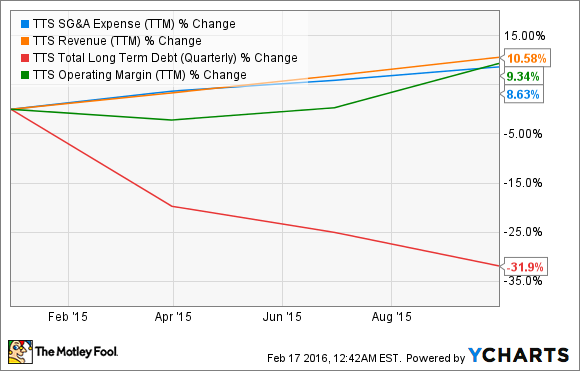 Keys behind the better results
Homeister has so far taken a much more conservative approach to expansion, growth, and capital allocation than Rucker:

It's not just cost-cutting, either. The company has also taken steps to better support its stores and staff, including investment in more resources at the store level.

These key initiatives are paying off. According to Homeister, the company has market managers in place in 20 of its markets, and will have its other five markets covered early in 2016. The market manager plays a key role in hiring, training, and direct marketing efforts, and in 2015, sales associate turnover fell by one-third and store manager turnover fell by half.

Tile Shop's efforts to grow pro sales is also paying off. The company is using direct marketing, training its staff on how to meet the needs of the professional as well as the do-it-yourselfer, and hosting pro-only events in order to expand its pro mix. In 2015, the mix of sales to professionals increased 300 basis points from the year before.

On the earnings call, Homeister said that the incremental marketing funds the company invested to market stores in new markets opened in recent years has also paid off. He said, "Each of these classes of stores delivered strong comps throughout the entire year and exceeded our original sales expectations."

Plans for 2016 and beyond
After only opening seven stores in 2015, the company is slightly accelerating that rate in 2016, with plans to open between nine and 12 new stores. However, even those openings will be relatively conservative in nature, with Homeister saying they would be "... focused mostly in markets where we already compete, where we will leverage economies of scale in marketing, distribution and store talent."

He went on to say that an 8% to 12% unit growth rate is "an appropriate target" for the company. They are also making a management change to better support store growth and real estate, shifting Carl Randazzo from senior VP of retail to senior VP of real estate and development, and hiring Lynda Stout away from Heritage Home Group to take on the role of senior VP of retail stores and sales.

The company's financial guidance for 2016 is decidedly conservative, with sales of between $312 million and $325 million representing 7% and 11% growth, and comparable-store sales growth in the low to mid-single digits. However, more of that growth is expected to reach the bottom line, with earnings forecast to increase between 15% and 34%. Management is also expecting strong free cash flows in 2016, and plans to use those cash flows to further pay down debt.

All considered, Tile Shop delivered a pretty solid first year under a first-time CEO. And while the cyclical nature of the housing industry and the whims of the economy will always play a role in the company's results, it's hard to argue that Homeister's approach at steady, sustained growth isn't working out so far.

Jason Hall owns shares of Tile Shop Holdings. The Motley Fool owns shares of and recommends Tile Shop Holdings. Try any of our Foolish newsletter services free for 30 days. We Fools may not all hold the same opinions, but we all believe that considering a diverse range of insights makes us better investors. The Motley Fool has a disclosure policy.