The energy market may look prime for a recovery, but whether or not it does bounce back soon, these three companies are positioned for years of success and can be bought at sale prices right now. 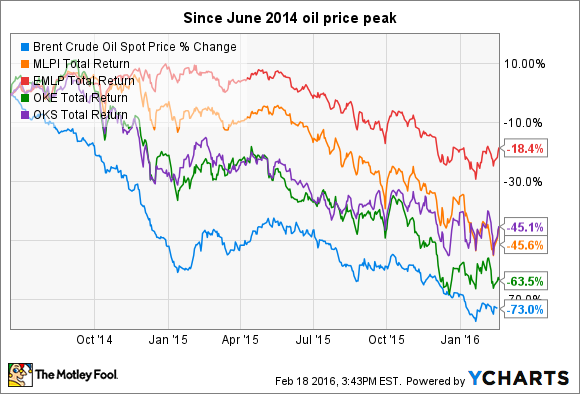 While there are no guarantees the downturn won't continue, infrastructure remains a critically important part of the energy industry, and a great place for income-seekers to invest. One company that particularly stands out as a great long-term income play is ONEOK (NYSE: OKE). It may be a bit higher up the risk ladder than other lower-yielding stocks, but it's worth a close look nonetheless. Let's talk about why.

ONEOK: a less risky investment today than a year ago
Even with its stock price well below where it was a year ago, ONEOK is really a safer stock and a stronger company today for three key reasons:

ONEOK Partners (and therefore ONEOK) had not-inconsiderable exposure to NGL commodity prices about a year ago because of the structure of many of its gathering and processing contracts, and NGLs have fallen as much or even more than natural gas and oil in recent years. Because of this, the gathering unit has been a real sore spot for the company, even putting the distribution payout at ONEOK Partners at risk.

Still, over the past year-plus, the company has been steadily moving its gathering agreements to a fee-based structure, significantly reducing its exposure to commodity prices. The results are already improving, and ONEOK Partners' dividend is probably secure now. Management expects more improvement in 2016. CEO Terry Spencer recently said he expects fee-based margin in the processing and gathering business to be more than 70% in 2016, up from 50% in 2015.

Lastly, a recent financing deal means ONEOK/ONEOK Partners has plenty of liquidity to focus on growth projects in the short term, without putting ONEOK's dividend at risk because of a need to sell stock to raise cash, or to cut the payout to meet new lending criteria or preserve its credit rating.

Put it all together, and the company is in a great position to continue expanding, continue paying a double-digit dividend, and continue working through commodity exposure in its gathering/processing business.

Putting it all together: Risk versus reward
The short term is full of unknowns, and the energy market especially is likely to remain volatile for much of the year. But what I also know is that ONEOK is a solid company, and probably a safer investment than the market has acknowledged to date.

It's paying a sizable 11% yield that management has reaffirmed is safe for at least the next year on multiple occasions, while also securing plenty of capital in recent months to invest in organic growth. Words are nice, but these actions to secure the dividend while also funding capital growth are the key for me.

ONEOK isn't zero-risk, and the relatively small amount of capital management retains from earnings doesn't give it a very wide margin of safety. But if you're willing to stomach the risk (which I think is lower than the market sees) of something unexpected forcing the company to cut its payout, ONEOK is a very compelling income investment that should pay off for years to come.