New features Twitter launched for businesses last week provide a preview of the direction the company is taking its customer service features.

When it comes to buzz about Twitter (TWTR 2.25%) stock, the market is mostly preoccupied with the company's recent inability to grow its user base. While this is definitely a critical problem management is going to need to solve, there is a new facet of the service investors should start eyeing: Twitter's increasing emphasis on becoming a real-time customer service platform. And a new set of customer service features Twitter just launched for businesses and brands takes the company in an important step in this direction.

Twitter makes communicating with businesses easier
Announced on Thursday, the newly launched features are aimed at helping care teams provide better customer service. They were built to help customers easily move from public tweets to direct messages and to customer feedback when tweeting to a business.

The first feature, which rolled out globally, enables users to move from a tweet to a direct message with a single click.

A business can now add a deep link to their Tweets that automatically displays a call to action button, which allows the customer to send the business a Direct Message, quickly and easily. 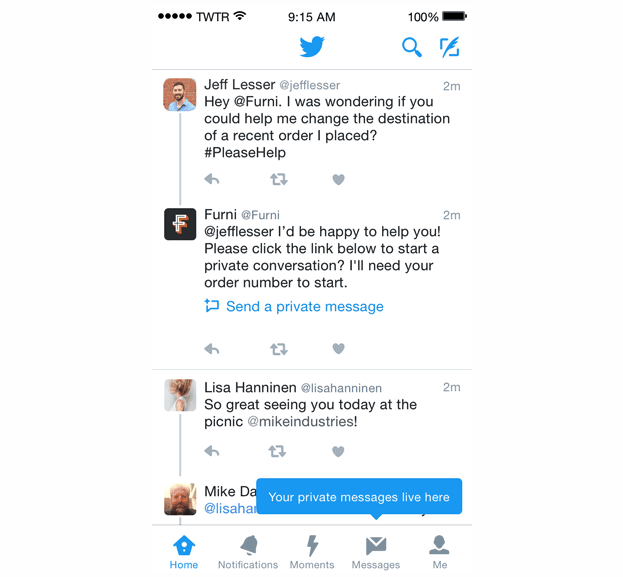 The second feature enables people to privately share their opinions in the form of a survey with a business after interacting with the company's service on Twitter. 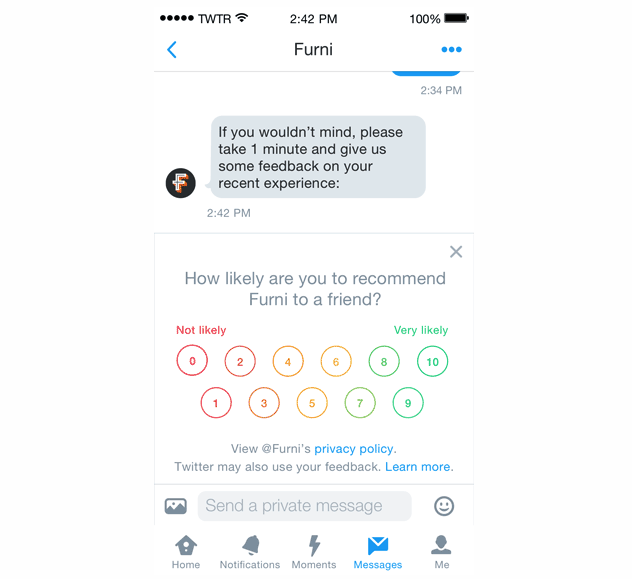 "Care teams have told us they love the open-ended feedback they get from people via Tweets and Direct Messages," explained Twitter product manager Ian Cairns, "but they also need the ability to survey customers in a structured way to better measure and improve their service experience."

A race with Facebook
Facebook (META -0.76%) has also been trying to up its game in business-to-consumer interactions within its Messenger app. In September, Facebook made it possible for businesses to respond to a comment on a post via a private message. Facebook also prominently highlighted call-to-actions for messaging businesses on Pages and even in ads.

Facebook CEO Mark Zuckerberg has said these organic business and customer interactions represent the groundwork for eventually finding a way to monetize the messaging service. With Twitter seemingly taking cues from Facebook and now focusing more on enabling these sorts of private conversations between customers and businesses, the company is capitalizing on a key opportunity to build itself out as a customer service platform and potentially do better at it than Facebook.

Indeed, while Twitter may only just be getting started in building out its customer service platform through direct messages, the company is already doing well in this area. Twitter said that businesses that use Twitter for customer service have more satisfied customers and reduce costs per resolution to one-sixth of the cost of a call center interaction. Furthermore, Twitter said "many" of its advertisers tell the company that more than 80% of their inbound social customer service requests on Twitter and that this customer service through Twitter leads to both increased brand loyalty and sales.

An emphasis on private messages for business and customer interactions will take Twitter's customer care tools to the next level, better positioning the company to grow in this important area. And it will also help it stay competitive with Facebook as the two race to provide businesses with the best tools to interact with their customers.