The midstream general partner, and its namesake MLP, Energy Transfer Partners, are expected to release fourth-quarter results after the market closes on Wednesday.

After months of speculation that trouble is brewing, Energy Transfer Equity (ET -1.55%) will finally have a chance to lay out its case to investors on Wednesday. What investors want to hear from the company is that there's no reason to worry because it not only doesn't anticipate any big changes from its prior plans, but that it has addressed areas of weakness. In particular, there are three things investors want to hear from the company this quarter.

1. "We're committed to the Williams Companies (WMB -0.72%) transaction"
There have been a number of rumors in the marketplace that the merger between Energy Transfer Equity and Williams Companies was falling apart or would need to be reworked. That's partially because industry conditions and credit availability have worsened, and partly because some issues that have cropped up at William Companies and its MLP, Williams Partners (NYSE: WPZ). In particular, Williams Companies' credit has been cut below investment grade due in part to Williams Partners' customer concentration as well as the fact that its earnings have been affected by its direct exposure to commodity prices.

Because of the market's worries, Williams Companies made it a point in its fourth-quarter earnings press release to say that its board of directors is "unanimously committed to completing the transaction with Energy Transfer Equity" at the agreed upon terms and as "expeditiously as possible." A similar statement from Energy Transfer Equity's board will go a long way to soothe investors fears about the deal.

2. "Our distribution isn't at risk of being reduced"
After large midstream rival Kinder Morgan (KMI -1.63%) slashed its dividend 75% late last year, Energy Transfer Equity and its namesake MLP Energy Transfer Partners (NYSE: ETP) have been called out by analysts as the next in line for a payout reduction. That's due both to concerns about their overall leverage, which recently came in at 4.7 times EBITDA, and concerns about Energy Transfer Partners' ability to fund its project backlog, given that issuing equity is a non-starter after its unit price has fallen almost 50% over the past year.

That said, there are some key differences between Energy Transfer and Kinder Morgan. First, Kinder Morgan's leverage was a full point higher -- more than 5.7 times EBITDA at its peak year. The other difference is the fact that Energy Transfer Partners completed a significant amount of drop-down transactions with Sunoco (SUN -1.59%) over the past year, which brought in $5.7 billion in cash and Sunoco units. Because of that capital infusion, Energy Transfer Partners believes that it can fully fund its 2016 project backlog without tapping into the capital markets.

If Energy Transfer Equity can break down the math that shows the company won't need to reduce its distribution this year, even after accounting for the closing of the Williams Companies transaction, that would make its investors quite happy.

3. "Midstream margins didn't get any worse"
One issue that cropped up last quarter was a big drop in earnings within Energy Transfer Partners midstream segment. After delivering fairly steady year-over-year earnings growth during the first two quarters, segment adjusted earnings in the segment slumped last quarter: 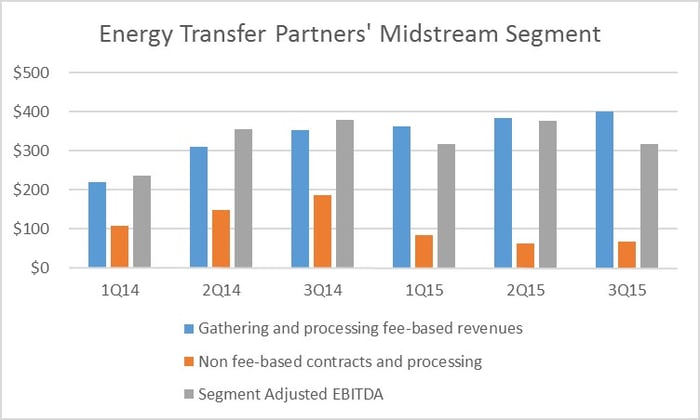 That drop was primarily due to the impact of lower commodity prices on non-fee-based contracts and processing. Unfortunately, commodity prices didn't get any better during the fourth-quarter, suggesting that this segment could continue to be under pressure. Because of that, the company needed to focus on reducing operating expenses, which last quarter actually grew $12 million year-over-year. Further, it needed to continue to bolster its fee-based revenues by converting contracts over to fee-based contracts. Suffice it to say, it needed to do something keep this segment's earnings from slipping any further.

Investor takeaway
Energy Transfer Equity has been under a lot of pressure over the past few months. Because of that, investors want to hear that the company is confident in both its ability to close the Williams Companies transaction and maintain its distribution. Further, they want to see tangible proof that the company is making progress to soften the impact that weak commodity prices are directly having on its namesake MLP, especially in its midstream segment. If Energy Transfer Equity can do all that, then investors' outlook might shift from gloomy to cautiously optimistic.