Derided my some members of the media, Spotify's recent use of promotions is exactly the right move to counter the rise of Apple Music.

From a whole host of measures, Apple (AAPL 4.86%) Music and Spotify are running away with the future of streaming music. To do so, Spotify has relied upon a mix of sleek design and savvy product innovation, while Apple has largely relied on its millions of users and renowned marketing muscle to get Apple Music off the ground.

While the two companies continue their global battle for users, a recent example from Spotify demonstrates why this two-horse race is just getting started.

The enemy of my enemy?
Last week, Spotify announced a promotion in the U.S. and U.K. that offers new subscribers to Spotify premium a free Chromecast from Alphabet subsidiary Google. 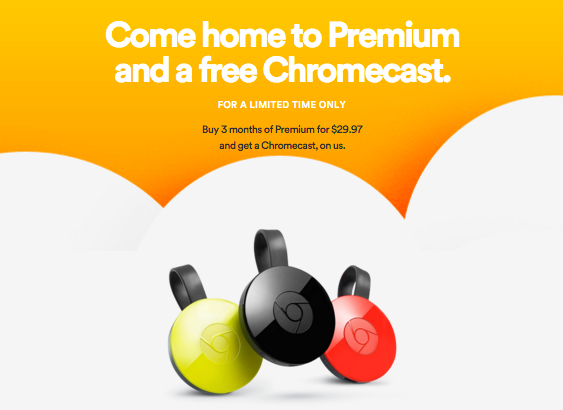 Digging deeper into the specifics, the promotion runs through the end of February, excluding Leap Day, strangely, and gives users of Spotify Premium access for the first three months at $29.97 total, plus the aforementioned Chromecast from Alphabet. For context, Alphabet's Chromecast typically retails for $35.

The move has been derided by some media outlets as a sign that Spotify is, in fact, feeling the heat from Apple Music. While I'll never argue that Spotify likely isn't acutely aware of the competitive threat that is Apple Music, I see this simply as good business on Spotify's part. Moreover, it's this kind of scrappy outside-the-box thinking that has enabled Spotify to remain ahead of its larger, vastly richer rival.

The great subscriber land grab
The economics of the music business are murky, to say the least. Streaming services like Spotify and Apple Music negotiate their licensing deals directly with major recording labels behind closed doors, which has, in the past, led to some seemingly bizarre financial arrangements. As a quick aside, this differs from Pandora's royalty rates, which technically operate as a "passive" product, whose rates, like those of all radio stations, are resultantly set by the U.S. Copyright Royalty Board. This will also change when Pandora launches its own on-demand product, a smart move for Pandora.

Either way, this inherent opaqueness within its sales structure makes modeling Spotify's revenue difficult. However, as with many "freemium" services, one thing is abundantly clear: premium subscribers are the key to long-term success.

According to an analysis leaked of 2014 data, industry journal Music Business Worldwide estimated that Spotify generated a mere 2.19 euros per free user versus 65.52 euros per premium user. This is, of course, old data, and Spotify has likely improved its advertising revenue per user in the interim. However, the general point -- that subscribers tend to be vastly more lucrative for services like Spotify -- is the main takeaway here.

As Spotify continues to work toward establishing itself as a mature, stand-alone business, the Swedish music upstart will continue to experiment with promotional initiatives to drive users from the less-profitable free accounts to more-valuable premium subscriptions. It's only good business sense.

It's also worth noting that converting free users to paid users -- which brings with it additional features like offline listening -- creates greater switching costs. As such, premium subscribers are doubly valuable to an upstart like Spotify in that they can help insulate it from a rival like Apple Music. While some misinterpret Spotify's use of promotions as a red flag, the reality is that it's simply sound execution from the world's largest on-demand music service.