Shares of Anglo American and Glencore have led a rally in mining stocks since the end of January.

U.S. stocks are little changed in early afternoon trading on Monday. The S&P 500 (SNPINDEX: ^GSPC) and the Dow Jones Industrial Average (DJINDICES: ^DJI) (DJINDICES: $INDU) are up 0.15% and 0.39%, respectively, at 12:57 p.m. ET. Today, however, it's the commodities markets that are commanding traders' attention -- witness the following headlines:

But as an equity-oriented investor, it's another commodities-related headline that really sparked my interest:

Indeed, this year's rebound in metals prices -- and, consequently, mining shares -- has turned what had been a winning short trade into a source of pain and distress for hedge funds (selling a stock short involves selling borrowed shares with the expectation of buying them back at a lower price).

In particular, the shares of mining giants Anglo American and Glencore, which were the two worst-performing stocks in the FTSE 100 last year, have surged over the past five weeks (the red line represents the iShares Global Metals & Mining Producers ETF): 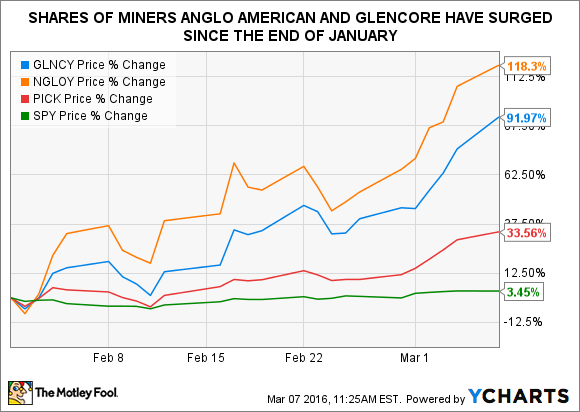 This reminded me that I had written multiple positive articles on miners, including Glencore (but not Anglo American) since last August. My view -- in keeping with my approach to investing -- was that of a value investor: Investors, traumatized by the severity of the bear market in commodities, were having trouble seeing past it. In overweighting negative scenarios for mining companies, the market was creating a disconnect between price and intrinsic value.

Or as one investment banker told Financial Times (emphasis mine):

[The recent price run-up] is deeply scary for the shorts. The fear of insolvency, which was never a reality, has now receded in Anglo and Glencore and institutions aren't selling. This could be an almighty problem.

In the spirit of accountability, the following table summarizes the price performance of the stocks that I highlighted from the article publication date through last Friday (it does not, therefore, include today's outperformance):

The numbers look encouraging at this stage, but it is worth remembering that it was not a free ride, in the sense that those numbers looked very different at the end of January -- and not in a good way. Investors in these shares would have had to suffer through gut-wrenching volatility to achieve the results above (which could reverse in the short term, too).

Note also that I was early with my calls, which is a cross that value investors must bear. However, the conviction to renew the calls at lower prices has made the difference between success and failure, in aggregate (so far, at least).

Finally, the mining sector is not one that enjoys particularly attractive economics. I did not have a long-term investment in mind when I mentioned these shares; rather, I thought investors would benefit from a winnowing of the gap that had opened up between price and intrinsic value. That process appears to be well under way.

Alex Dumortier, CFA has no position in any stocks mentioned. The Motley Fool owns shares of Freeport-McMoRan Copper & Gold. We Fools may not all hold the same opinions, but we all believe that considering a diverse range of insights makes us better investors. The Motley Fool has a disclosure policy.