The Italian-American automaker has lots of problems, but Jeep isn't one: Sales at the iconic SUV brand have been booming all over the world. But can Jeep's success buy enough time for CEO Sergio Marchionne to turn around the rest of the company? Three auto-minded Fools weigh in.

The iconic Wrangler is the heart and soul of the vaunted Jeep brand. But is Jeep's heart (and popularity) enough to carry troubled automaker Fiat Chrysler? Image source: Fiat Chrysler Automobiles.

It's a good question. CEO Sergio Marchionne is working on a daring plan to remake the company, building out the old Alfa Romeo and Maserati brands as global luxury contenders while he shuffles production to make more profitable SUVs (and fewer low-margin sedans) here in North America. Meanwhile, Jeep sales are booming around the world -- and the brand's profits are probably carrying the rest of the company right now.

If he pulls it off, we might well look back and say that Jeep did "save" Fiat Chrysler. But that's a very big "if." We asked three auto-minded Fools to take a look at what's happening with Jeep and offer their takes.

Daniel Miller
There's no question Jeep has been one intriguing story since Fiat Chrysler Automobiles made its debut on the New York Stock Exchange. Jeep has defied its critics, which have generated numerous quality studies suggesting the SUV brand significantly lags its competitors, with consumers continuing to drive the vehicles off dealership lots at a rapid pace. Just last month Jeep sales were up 23% compared to the previous year, marking an incredible 29 consecutive months of year-over-year sales gains. Look below to see its annual sales surge in the U.S., which currently generates the majority of global Jeep sales. 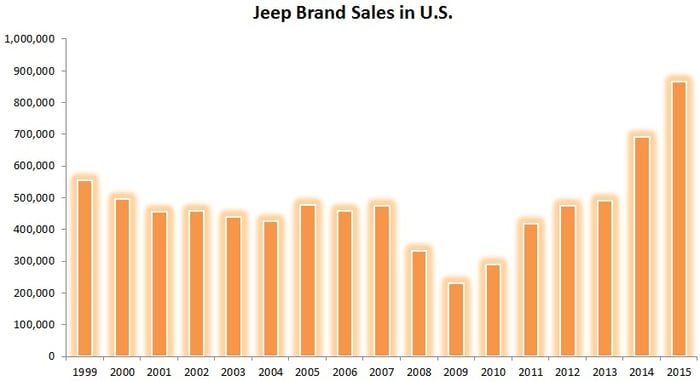 Consider that from 2009 through 2015 Jeep's global sales have increased 266%, for a compound annual growth rate (CAGR) of 24% -- that compares favorably to the global utility vehicle industry's 172% gain and 18% CAGR. That growth is largely expected to continue with Jeep's 1.3 million global sales last year growing to more than 2 million in 2018.

With Jeep generating more than 28% of FCA's global sales during 2015 -- and with SUVs generating higher transaction prices and better margins than most vehicles -- it's easy to argue that Jeep is already saving Fiat Chrysler Automobiles. Jeep's success is probably keeping the lights on, currently. But the real question for investors: Is Jeep enough to make FCA a legitimate investment in the auto industry?

Jeep is saving FCA, but it's not enough. For FCA to be a legitimate investment option, the automaker needs to continue expanding Jeep globally as it has, but expand Alfa Romeo and Maserati just as soundly -- which it absolutely has not.

John Rosevear
As I see it, FCA CEO Sergio Marchionne is in a race: Can he boost production of SUVs and discontinue unprofitable sedan products before the next (inevitable) global economic downturn?

It was clear from FCA's fourth-quarter earnings report that SUV and truck sales are what's carrying the company right now, and that FCA could sell even more Jeeps if only its maxed-out factories could make more. It was clear to Marchionne, too: During the earnings call, he revealed a plan to shuffle FCA's product plan in order to boost production of SUVs -- in essence, to go "all-in" on Jeep, and to a lesser extent Ram pickups and a few other high-profit products.

The plan involves killing off the slumping Chrysler 200 and Dodge Dart sedans, and using their U.S. production lines to make more SUVs. It'll probably take a couple of years for FCA to make this happen, but if it can manage to get those reworked assembly lines rolling before the next downturn, it should be able to significantly boost its profits in North America, paying down debt and boosting its cash reserves.

Jeep is selling all of the Cherokees it can make. It's believed that FCA will discontinue the slow-selling Dodge Dart and use its factory to make even more Cherokees in a couple of years. Image source: Fiat Chrysler Automobiles.

The plan does leave FCA in something of a bind: With fuel-economy regulations tightening all around the world, it will need some fuel-efficient mainstream car models in its lineup (and I don't mean the Dodge Charger and Challenger. They're thought to be solidly profitable products for FCA, and I don't think they're going anywhere -- but they're not the products that are going to help boost FCA's Corporate Average Fuel Economy significantly).

Marchionne says that he's looking for a partner to make sedans for FCA, likely rebadged versions of another automaker's products. (Ford CEO Mark Fields hinted in January that the Blue Oval might be open to such a deal.) Paying another automaker to make its sedans won't exactly boost FCA's profit margins. But even if FCA only breaks even on those rebadged cars, the added production of Jeeps and other higher-profit vehicles could well carry the company for quite a while. That would buy Marchionne some time to get Alfa Romeo's act together, among other things.

But Marchionne and his team need to get there before sales start to slump. If they can, then Jeep might well "save" the company. We'll find out.

Rich Smith
As I scroll through the history books on past JD Power Vehicle Dependability Studies, I see Jeep ranking fourth from last in 2014, falling to third from last in 2015, and now shooting up the rankings in 2016... all the way to fifth from last.

So color me unimpressed with Jeep's performance to date.

Fact is, even if you're one of those folks who likes to dismiss JD Power's VDS reports as "old data," and point to the analysts' opinions on "Initial Quality" as more important, the news for Jeep isn't particularly good. While we're still waiting for the 2016 IQS to come out, last year's ranking put Jeep in fifth (from last, natch) place. So it sure looks to me like Jeep is still stuck in the muck, and I don't see how that does anything at all to "save Chrysler."

Fact also is, the 2015 IQS had three of Fiat Chrysler's major car brands -- Jeep, Chrysler, and Fiat, respectively -- occupying the fifth-from-last, third-from-last, and... dead last positions on JD Power's report. And given that the 2016 dependability study at least has Chrysler and Fiat ranked a bit higher than those rungs, I'd say the likelihood is that Fiat Chrysler's motor pool is looking worse this year -- not better.