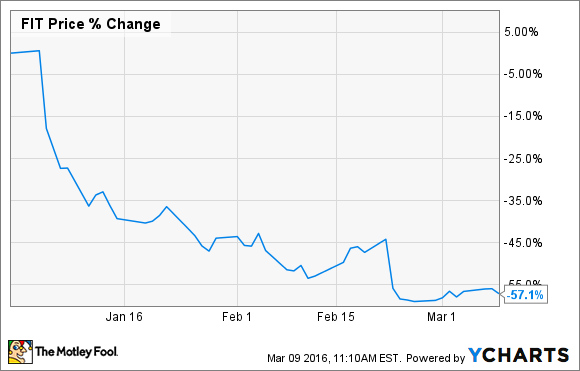 However, FitBit recently received one encouraging piece of news when word arrived that the second generation Apple (NASDAQ:AAPL) Watch will in all likelihood be delayed until later this year.

Apple plans to hold its much-touted spring product event March 21. Learning the date of the event is fun, but of far greater importance, Apple has reportedly also scuppered its plans to unveil the second generation Apple Watch at the event. For context, Apple used its 2015 spring product event to demo the first generation Apple Watch. Given Apple's typical 12-month product cycles, this led many observers to assume -- alas, to no avail -- that the Apple Watch 2 would follow a similar pattern. Media reports do peg Apple as featuring new colors and textures for Apple Watch bands at its March event, though these updates are believed to be solely cosmetic.

Instead, the rumor mill now places the second-generation Apple Watch as launching at some point in fall 2016. Importantly, though, the company has yet to announce anything officially, so investors should not necessarily put full stock in these rumors. Whether this delay, if accurate, reflects a shift in marketing tactics or product development issues is anyone's guess. Either way, one takeaway here lies beyond dispute -- FitBit wins from a likely Apple Watch delay.

FitBit in the crosshairs?
The extent to which Apple's smartwatch efforts threaten FitBit has generated plenty of debate in recent months. However, regardless of your perspective on the matter, all tech investors should agree that the delay of a potential competitor benefits FitBit one way or another.

At its most apocalyptic, the Apple Watch 2 could prove a category killer, not only for FitBit, but for activity trackers in general. Rumors have long circulated that Apple intends to integrate advanced biometric sensors into its smartwatches. In this case, this never-before-seen functionality could revolutionize not only fitness tracking, but also preventive healthcare as well. Apple has been aggressive in hiring experts and acquiring start-ups with relevant expertise at the intersection of human health and technology. The company also enjoys effectively unlimited resources with which it could pursue the kind of breakthrough technologies that could make FitBit's current devices look like the modern equivalent of 8-track players. However, given the degree of difficulty many fitness trackers have experienced in perfecting sensors like heart rate monitors, FitBit included, it seems less than likely that Apple will pull a rabbit out of its hat with the Apple Watch 2.

What's more, shipment data also supports the idea that smartwatches and fitness trackers enjoy a distinct boundary in the eyes of many consumers. For example, FitBit sold 21.4 million devices in CY 2015, while IDC estimates claim Apple sold 13 million Apple Watches last year. These numbers are likely to shift in coming years, but this apparent delineation between fitness trackers and smartwatches suggest FitBit should be at least somewhat insulated from Apple's threat, even if subsequent device generations add compelling functionality.

At the end of the day, many consumers simply won't want smartwatches. So while Apple and other smartwatch OEMs certainly shouldn't be overlooked as an important threat to FitBit, the delay of the Apple Watch should help further buttress the fitness tracker firm in the year ahead.