Thanks to its already low valuation, this Fool doesn't believe Bank of America's stock is as risky as it might otherwise seem.

While I'm critical of Bank of America (BAC -2.87%) and don't believe it can generate the same level of profitability as Wells Fargo (WFC -2.25%) or JPMorgan Chase (JPM -1.40%), I nevertheless don't think it's a risky stock. I actually think it's a pretty good buy right now, which is why I own it.

Yes, of course, it's possible for Bank of America's shares to fall further. But absent economic Armageddon, there's a limit to how cheap they can get at this point. During the financial crisis, they dropped to less than 25% of their book value. But while the world economy is far from healthy right now, there's no comparison to 2008-09. 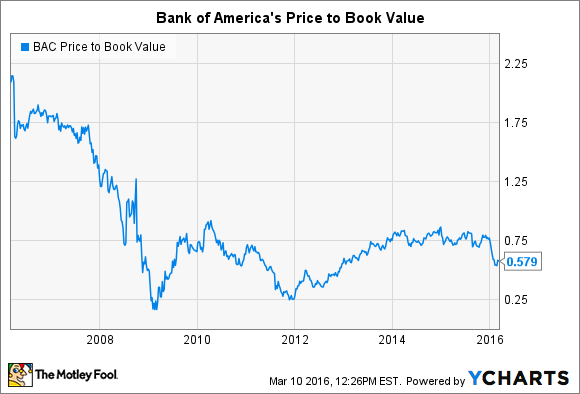 On top of this, Bank of America's earnings are on an upward trajectory. Last year was the first time since the crisis that it reported four consecutive calendar quarters of respectable earnings. It ended the year with a 0.74% return on assets.

Is that where Bank of America wants to be? No, not by any means, as a well-run bank earns in excess of 1% on its assets -- though, it's worth noting that the bank's board of directors has targeted a three-year average 0.8% return on assets as the threshold for CEO Brian Moynihan to earn his performance-based incentive compensation.

Most importantly, multiple developments over the past two years imply that Bank of America's profitability gains are sustainable and still on the ascent. It completed its Project BAC, an expense initiative designed to slash $8 billion in annual costs. Two recent court cases have significantly curtailed its outstanding legal liability. And its debt rating got a boost last year, which should eventually translate into a lower cost of funds.

Now, to be clear, owning Bank of America's stock isn't entirely risk free. And particularly over the long run. As it's currently constructed, it will be all but impossible for Bank of America to compete on a level playing field against the likes of Wells Fargo and JPMorgan Chase.

Wells Fargo has two particularly powerful advantages. First, because it has limited Wall Street operations, regulators allow it to operate with less capital than Bank of America. Second, though for the same reason, Wells Fargo's focus on traditional banking allows it to run a leaner operation, as it doesn't have to pay the absurdly inflated compensation demanded by investment bankers or provide them with the most expensive office space in Manhattan.

With respect to JPMorgan Chase, meanwhile, Bank of America lags far behind its universal banking counterpart when it comes to the investment banking league tables. This isn't a huge surprise, as JPMorgan Chase has long been a major player on Wall Street while Bank of America is a relative upstart, but it means that the latter's investment banking operations won't be as lucrative as the former's anytime soon.

In short, while Bank of America seems to be at a competitive disadvantage vis-à-vis its two biggest competitors, Wells Fargo and JPMorgan Chase, I believe that its bargain-basement valuation goes a long way toward compensating investors for its shortcomings. And, at the very least, its low share price takes a lot of the risk out of owning its stock.