Intel is hosting a data-center focused event where I believe the odds are good that it will unveil new server processors. 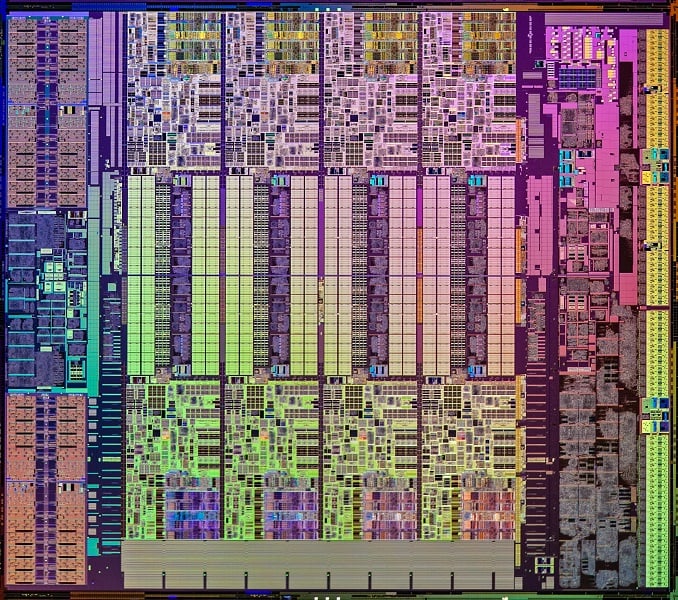 On Intel's (INTC -1.41%) investor relations website, the company posted a "save the date" notice for an event scheduled for March 31.

Apparently, the company's Data Center Group will be hosting a so-called "Cloud Day." The event will be led by Data Center Group chief Diane Bryant and the company says that it will "share updates on how the Intel Cloud for All initiative is accelerating widespread cloud adoption by making cloud technology easier to deploy, manage and scale."

I believe that Intel will take the opportunity to unveil its next generation Xeon family, formerly code-named Broadwell-EP on this date. Here's why this matters for investors.

Broadwell-EP should bring about a fairly substantial boost in performance-per-watt
A key metric that's important to data center operators is "total cost of ownership." This includes, in addition to upfront hardware acquisition costs, the various costs associated with running the data center (not the least of which include power and cooling). 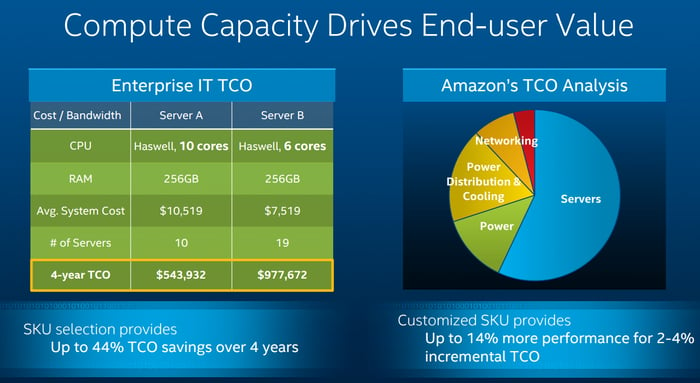 Upfront hardware costs are a major part of the equation, but other things such as power and power distribution and cooling, are significant, too. In order to minimize the total cost of ownership -- as the math in the slide shows -- it often makes sense to build fewer servers with more powerful processors each rather than a greater number of servers with cheaper/less powerful chips.

Broadwell-EP should be great, but look for Purley to be the "game changer" in 2017
Broadwell-EP represents more or less a transition of the existing chip architecture (with a few improvements/tweaks) onto a more advanced chip manufacturing technology. These chips will also use the same motherboards/platforms that current generation Haswell-EP chips use.

Raw performance goes up and performance-per-watt goes up. For many customers already using Haswell-EP, Broadwell-EP probably isn't going to be all that interesting of an upgrade. However, for data centers still using Ivy Bridge-EP chips (first generation 22-nanometer chip family) or older, Broadwell-EP represents a very substantial upgrade.

Broadwell-EP, combined with the Broadwell-based Xeon D processor family, make for quite a strong lineup for the majority of 2016 and into 2017. However, I think the real "fun" -- and the potential "game changer" -- begins in 2017 with the launch of the Purley platform (Skylake-EP/EX).

The Skylake chips will be built on the same 14-nanometer technology that Broadwell-EP will be, so Intel won't get the very nice performance-per-watt benefits that come with new transistors. However, Purley is expected to bring a substantial architectural overhaul, which should bring significant performance and power benefits by themselves.

Additionally, Purley is supposed to deliver a major overhaul to the platform itself, bringing a whole host of new features beyond raw CPU performance that should be quite attractive to data center operators. This product family is one of the reasons that I'm very bullish on Intel's data center performance in the 2017 timeframe.