The Massachusetts-based insurer's earnings improved in the fourth quarter of 2015.

What happened this quarter?
After unusual catastrophe losses in the first quarter of 2014, Safety's underwriting is coming back in line with historical norms. 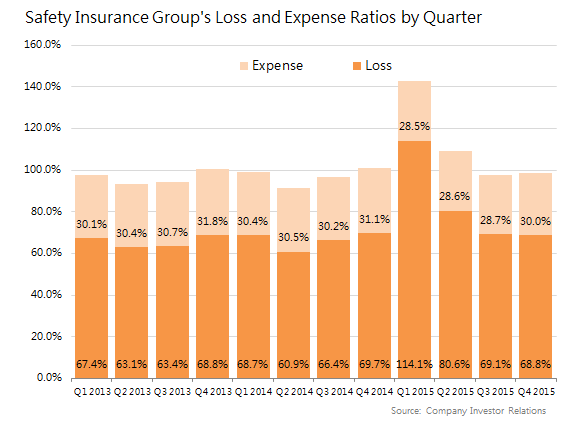 Looking ahead
Like all property and casualty insurers, Safety's business model remains highly rate sensitive. The company disclosed that its investment portfolio is currently generating a yield of about 3.2% per year, down from 3.6% in the fourth quarter of 2014, even though its average duration has increased.

The general level of interest rates remains a core driver of its earnings. This year, it earned about $41 million from net interest income, a decline from just over $42 million last year due to a drop in investment assets related to catastrophe losses earlier in the year.

With the end of the first quarter of 2016 just two weeks away, and with warmer winter weather in New England, Safety's first quarter appears promising.

Jordan Wathen has no position in any stocks mentioned. The Motley Fool recommends Safety Insurance Group. We Fools may not all hold the same opinions, but we all believe that considering a diverse range of insights makes us better investors. The Motley Fool has a disclosure policy.