Could an economic turnaround be on the horizon in Brazil?

What: Shares of Brazil's industrial stocks are surging higher today as investors speculate the economic downturn is coming to an end. Utility Companhia Energetica Minas Gerais (ADR) (CIG) was up 11% on Thursday, while steel producers Companhia Siderurgica Nacional (ADR) (SID 1.06%) and Gerdau SA (ADR) (GGB 1.01%) were up 20% and 13%, respectively, late in trading. The moves higher were welcome news after a rough few years for the stocks. 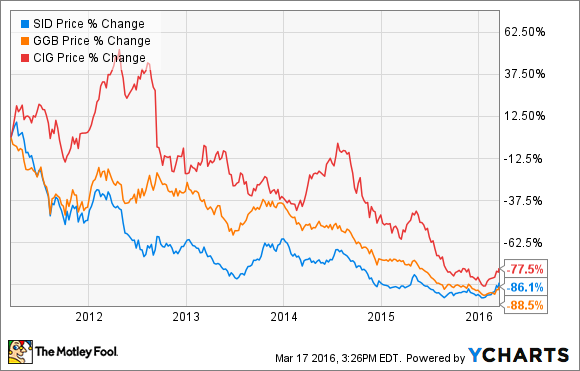 So what: The Brazilian real surged 3% against the U.S. dollar today, which investors may see as a bullish sign. UBS economists also came out with a report that said they think confidence is hitting a bottom and the recession will begin to slow in coming quarters. But they went on to say that Brazil's problems are structural, not cyclical, which will require real political reform, something the company doesn't have a good history of executing.

Some of the move higher is based on hopes that political change is taking place, partially because of massive protests in the country. Today, a judge blocked former president Lula Da Silva from taking a high-ranking position in new president Dilma Rousseff's administration. Both have been investigated as part of the Petrobras scandal in Brazil.

Now what: This is the classic rally based on speculation of future good news without any really good news to report. Even UBS is only saying it thinks the economy's retraction will slow later this year. But there's little doubt that 2016 will be a year of contraction in Brazil, no matter how you look at it.

Buying shares of utilities or steel companies in Brazil today would be a roll of the dice and that's not a risk I'm going to take. The economy is still on shaky ground and the political situation is anything but stable. Riots may help turn the country's future around, but for investors, that's a gamble and definitely not the kind of news I would be buying stocks on today.