From soft drinks to airplanes, pharma and glass, these four businesses will let dividend-hungry investors sleep at night.

When it comes to investing, there's arguably no better way to let the magic of compounding returns do its work than by purchasing and holding solid dividend stocks.

Dan Caplinger: The best stocks have popular brands and the pricing power to help boost revenue and profits over time, and PepsiCo (PEP 0.35%) is a great example of how that simple proposition can turn into huge returns for investors. PepsiCo has combined the value of its namesake soft drink franchise with the snack goodness of Frito-Lay and other key food brands in a single stock, and the company has built a strong track record of excellent dividend performance. Currently, Pepsi shares have a dividend yield of 2.8%, and the stock has a 44-year track record of raising its payout each and every year. Most recently, the company gave investors a 7% boost, and many expect another dividend increase toward the middle of 2016.

PepsiCo isn't without threats, and the same health concerns that have plagued its peer in the sugary-soda business have also required a response from PepsiCo. However, the inherent diversification of having the snack business has helped insulate PepsiCo from the full brunt of controversy, and a solid reputation for healthy thinking also gives the No. 2 cola maker an edge. PepsiCo has gotten through tough times before, and it has the staying power to give investors the dividends they want with growth potential as well.

Daniel Miller: When looking for a dividend you don't have to babysit, the first stock that comes to mind is The Boeing Co. (BA -1.81%), for multiple reasons. The first reason is that the aviation juggernaut has a massive backlog of commercial airplane orders alone. Boeing's backlog of roughly 5,800 commercial aircraft is valued at $432 billion alone, and when its defense products backlog is added in the value jumps to $489 billion.

When you're looking for a dividend and company you don't have to babysit, having roughly five year's worth of revenue locked up in the backlog, that's as close to auto-pilot as you can get in the stock market. Beyond that, though, Boeing's stock price has increased over the past couple of years despite defense spending cuts by the government. That defense cycle is turning and the U.S. defense spending should increase going forward thanks to political cooperation -- at least we hope -- and growing threats in the Middle East.

Lastly, the barrier of entry in Boeing's industry shouldn't be forgotten. It takes incredible knowledge to design, produce, and assemble commercial aircraft and Boeing practically operates in a duopoly with its Airbus competitor, and that isn't going to change anytime soon. Boeing is easily a valuable dividend stock that nobody needs to lose sleep over, or babysit.

George Budwell: Over the past year, AstraZeneca's (AZN 0.90%) shares have fallen on hard times because of the introduction of generic competitors for former best-sellers like the acid reflux drug Nexium that have, in turn, caused the company's revenues to flat-line, despite the approval of a handful of important new drugs such as the ovarian cancer medicine Lynparza.

According to S&P Global Market Intelligence, for instance, AstraZeneca's shares have now shed almost 22% of their value in the past 12 months: 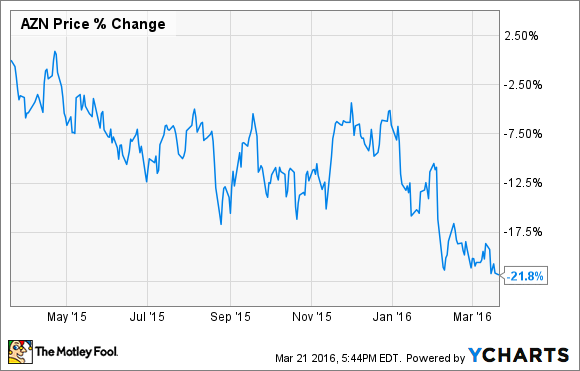 On the bright side, this steady march downwards has turned AstraZeneca into one of the highest yielding dividend stocks in the entire healthcare sector, with an outstanding yield that presently stands at 9.97% for the full year.

Although its 12-month trailing payout ratio of 125% doesn't exactly inspire confidence that this substantial yield is sustainable for the long term, management has remained steadfast in its commitment to paying a top-tier dividend during this turbulent period by declaring a total payout of $2.80 per share for 2016 in its recent fourth-quarter earnings call.

Looking ahead, the key issue to understand is that AstraZeneca's management is rebuilding the company around the high growth oncology market -- placing a heavy emphasis on rapidly developing its lead immuno-oncology product candidate durvalumab, at least initially, as a novel lung cancer treatment. Based primarily on durvalumab's potential, AstraZeneca is projecting that its annual revenue could nearly double from current levels to $45 billion by 2023.

As expected with any experimental-stage cancer drug, though, durvalumab has hit some speed bumps during its clinical trials, giving investors cause for concern in the process. But the big pharma does sport one of the most diverse immuno-oncology programs in the industry, giving it a great shot at creating significant value for patient investors down the road.

Put simply, I don't think income-seeking investors have to worry that much about AstraZeneca's ability to break out of this funk, and eventually transform into a top player in the red hot field of immuno-oncology. In the meantime, investors are essentially being paid to wait while the company works through these troubled waters.

Steve Symington: If you want to invest in a tech company that stands the test of time and rewards patient shareholders with generous capital returns, look no further than glass technology specialist Corning (GLW 0.97%). Founded in 1851, Corning has successfully weathered more than its fair share of industry downturns, recessions, and technological revolutions. And despite stubborn global economic headwinds in recent quarters, Corning is arguably stronger than ever as it positions itself to succeed no matter what challenges it faces.

Despite enduring what CEO Wendell Weeks described as the "worst display industry environment in five years" last quarter, for example, Corning also achieved the smallest glass price declines from its core Display segment over the same period. And though revenue and earnings per share both declined (5.2% to $2.4 billion and 26.9% to $429 million, respectively) in Q4, Corning still managed to generate robust operating cash flow of over $1 billion, and free cash flow of $628 million during the quarter. All the while, Corning spent $3.2 billion repurchasing its shares in 2015, and its dividend currently offers a solid annual yield of 2.7%.

What's more, during the subsequent conference call, Weeks elaborated continued moderation in glass price declines offers a "good foundation for stabilizing returns in this business." Corning is also consistently outperforming its competition and seizing emerging growth opportunities, notably including a recent design win in the automotive glazing market with Ford's new GT supercar set to use Corning Gorilla Glass for Automotive in its windshield and two other windows.

Finally, add to that the company's new strategic and capital allocation framework revealed two quarters ago, under which Corning will deploy more than $20 billion in capital through 2019. That includes $10 billion returned to shareholders through repurchases and dividends, and $10 billion invested in research, development, and engineering, as well as capital spending and strategic M&A.

In the end, for investors willing to watch Corning continue to steadily cement its leadership and emerge even stronger when this industry downtrend abates, I think it represents the perfect high-yield stock you don't need to babysit.