It's been a rough few months for the stock prices of many industrial conglomerates, which means their current dividend yields have risen. But should you take this opportunity to buy?

The past three months haven't been kind to General Electric (NYSE: GE) or its industrial conglomerate peers: 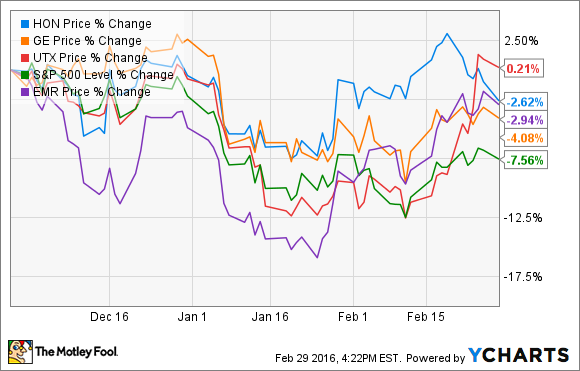 One silver lining is United Technologies (NYSE: UTX), which is in positive territory just by the hair of its chinny-chin-chin. Another is that at least all of those stocks are beating the S&P 500's dismal performance.

A third silver lining is that when stock prices drop, dividend yields rise. So the current yields for these manufacturing titans and the rest are all higher than they were three months ago, but that's probably not enough of an incentive to buy.

Where things stand now
In December, all four of these companies had payout ratios higher than the S&P 500's. As of the first of March, most of the yields had edged upward, but not by much:

As expected, most of the yields have seen slight gains because of the modest drops in their stock prices. But the gains aren't that pronounced. Ultimately, a company's stock price would have to drop quite a bit to make an appreciable difference in the dividend yield. These small changes don't fundamentally change the dividend thesis for any of these companies. Both the stock prices and dividend yields of all four are outperforming the S&P, another good sign for investors.

What's up ahead
General Electric and Honeywell have been very clear about their upcoming dividend plans.

GE has frozen its dividend for the time being to focus on its ongoing divestiture of its former GE Capital assets, but the shareholder value created by its share buybacks will more than make up for the freeze. In his letter, Immelt made the further commitment to return $100 billion to shareholders through share repurchases and dividends between 2015 and 2018. That's up from the $90 billion he was promising last year. Whether this increase reflects increased confidence by Immelt about the company's current plans or represents an additional commitment he's willing to make to shareholders, it's welcome news.

Honeywell CEO David Cote has made a commitment to shareholders, too. Cote's 2014-2018 five-year plan has called for the company to grow its dividend faster than it grows earnings. Cote has executed this plan as promised, and investors can expect further dividend increases as the year progresses. Since Honeywell's dividend yield is the smallest of the four, this rapid dividend growth is an essential part of the thesis for investing in the company.

History in the making
Emerson Electric and United Technologies have been less clear about their overall dividend plans, but if history is any guide, they will continue their long streak of dividend increases. United Technologies has raised its dividend every year since 1994, and Emerson Electric has done so since 1956. Even given the current economic climate, it's unlikely that either company would end that history of dividend increases now.

United Technologies recently completed the sale of its Sikorsky aircraft unit to Lockheed Martin for $9 billion. United Technologies CEO Greg Hayes pledged to use $6 billion of the sale to repurchase shares. He'd be unlikely to make such a promise if he was contemplating a dividend freeze -- otherwise he'd use the money to up the dividend.

Emerson Electric has been hit hard by falling oil prices, which could put the dividend at risk. But its status as a Dividend Aristocrat -- a company that has annually raised its dividend for 25 years or more -- is one of its major selling points. Indeed, the board of directors has already voted to increase the company's dividend for the first quarter of 2016 to an annualized $1.90 per share, making 2016 its 60th consecutive year of dividend increases.

In his letter to shareholders, Emerson CEO Dave Farr pointed out that the company returned $3.8 billion to shareholders in 2015, with $2.5 billion in share repurchases and $1.3 billion in dividends. He anticipates the total 2016 payout to be smaller -- just $1.8 billion to $2.5 billion -- and hasn't broken out those numbers. But these numbers indicate the dividend is secure.

The takeaway for dividend investors
All four of these industrial conglomerates pays a dividend higher than the S&P 500's, and the prospects for dividend growth look positive.

Honeywell's dividend yield is currently the lowest, but it's also the only one of the four that has pledged to grow it faster than earnings. Even though GE's is frozen for the time being, it plans to offer share buybacks to supplement the dividend. Emerson and United Technologies are poised to continue their long histories of dividend increases. Dividend investors should still feel secure that these companies are safe places to park their money.

The events of the past few months have barely changed those dividends, and haven't changed the thesis for investing in any of these companies. So while now is perhaps a slightly more favorable time to buy in to each of these dividend payers, it's not a now-or-never proposition.

John Bromels has no position in any stocks mentioned. The Motley Fool owns shares of General Electric Company. The Motley Fool recommends Emerson Electric. We Fools may not all hold the same opinions, but we all believe that considering a diverse range of insights makes us better investors. The Motley Fool has a disclosure policy.