Please ensure Javascript is enabled for purposes of website accessibility
Log In Help Join The Motley Fool
Free Article Join Over 1 Million Premium Members And Get More In-Depth Stock Guidance and Research
By Travis Hoium - Mar 25, 2016 at 7:20AM

Why are two of the best solar companies in the world being priced like they're going out of business?

Solar energy may be the biggest investing opportunity of this century. There's enough solar energy hitting the earth every hour to replace all other energy sources combined, yet we're just scratching the surface of the industry's potential.

To that end, solar is slowly beginning to upend the $2 trillion electricity industry, yet it's getting very little love compared to larger, more entrenched energy competitors. Just look at the market caps of First Solar (NASDAQ: FSLR) and SunPower (NASDAQ: SPWR), the two largest U.S. solar companies, compared to ExxonMobil and Chevron. But that doesn't mean these stocks aren't incredibly cheap. 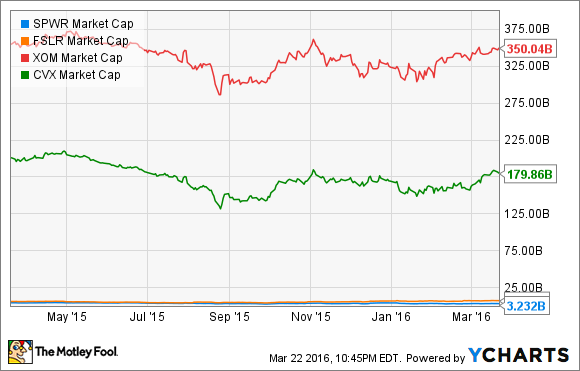 Growth in solar has just begun
It hasn't been until the last few years that solar energy was truly competitive with traditional energy sources. But now that it is, the growth opportunity is impressive. Below is a global total addressable market estimate from SunPower's 2015 Analyst Day presentation. Note that the market will double over the next five years, and that was even before the U.S. solar investment tax credit was extended, so the growth curve should be even steeper. 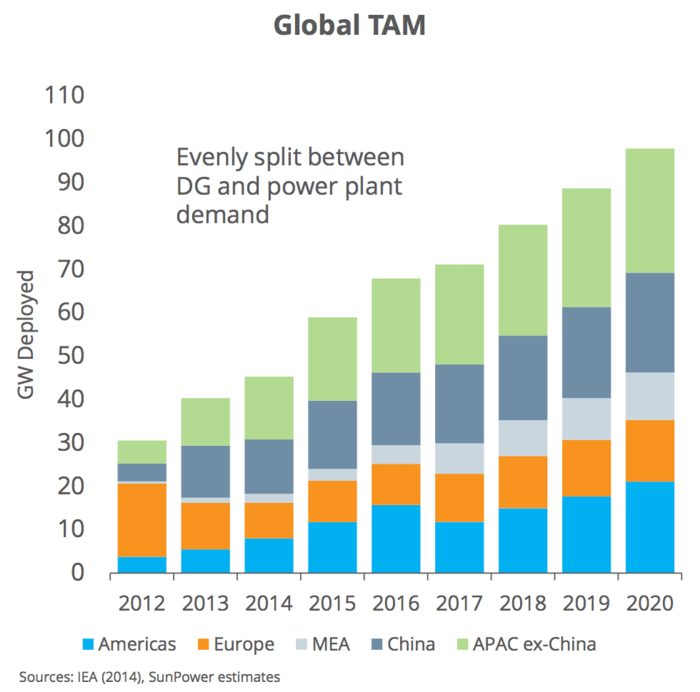 This growth will be driven far less by subsidies than solar was in the past too. Countries around the world are reducing the subsidies they'll give solar in coming years, and the industry is still winning business because it's becoming cost effective versus fossil fuel sources of energy.

The two solar leaders
There's no doubt the solar industry is growing, but that doesn't mean it's been a big moneymaker for investors. The latest example of that is SunEdison (SUNEQ), which built the largest renewable energy development business in the world, only to over-leverage itself -- now it finds itself teetering toward bankruptcy. SunEdison tried to leverage commodity solar panels and wind turbines to build a renewable energy giant, but it couldn't generate strong margins or profit for investors, leading to its eventual downfall under a mountain of debt.

SunPower and First Solar have differentiated technology that allows them to command higher margins for solar systems. SunPower has the world's most efficient mass-produced solar cells, which it leverages to build systems large and small. First Solar has vastly increased its efficiency in thin film solar panels, which typically perform better in harsh environments.

The fact that both SunPower and First Solar make a differentiated solar panel that performs better than commodity solar panels means they're able to standardize their systems and make more money than competitors. Combine that with their conservative balance sheets, which keep them away from debt-related trouble, and they're able to stay a step ahead of the pack.

Why are these stocks so cheap?
It's clear the opportunity for solar companies is incredible, and I think First Solar and SunPower are clearly the leaders in the industry that investors should watch. But the market hasn't given them much credit for that position. If you pull out their cash positions and their stakes in 8point3 Energy Partners (CAFD), a yieldco they co-sponsor, the stocks are trading more like value stocks than growth stocks.

Some of this discount is likely because of the problems competitors have run into and low oil prices, but I think it's clear First Solar and SunPower have built sustainable, profitable businesses in a growing industry. That makes them great long-term values, and I think they're incredibly cheap when you consider the potential they have ahead of them.