Please ensure Javascript is enabled for purposes of website accessibility
Log In Help Join The Motley Fool
Free Article Join Over 1 Million Premium Members And Get More In-Depth Stock Guidance and Research
By Matthew DiLallo – Mar 26, 2016 at 9:05AM

Over the past year high-yield stocks in the energy sector have been crushed by crashing commodity prices and credit concerns. Unfortunately, the carnage might not be over with a number of high-yielders still holding the line on overly generous payouts. They may be able to hold on in the near term, but should energy prices remain in the doldrums they won't be able to hold on forever. Prime candidates for such a scenario are Energy Transfer Equity (NYSE: ETE), Energy Transfer Partners (NYSE: ETP), Williams Companies (NYSE: WMB), and Williams Partners (NYSE: WPZ). While cuts aren't imminent, it's clear that there are risks by simply looking at their current yields: 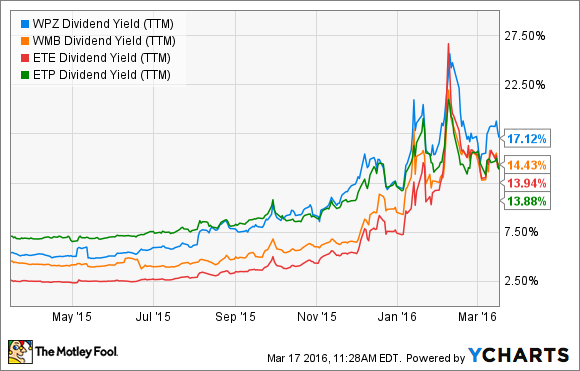 Energy Transfer's numbers don't back up its rhetoric
According to CEO Kelcy Warren, neither Energy Transfer Equity nor its namesake MLP Energy Transfer Partners, are even considering a distribution cut at the moment. In fact, Warren emphatically stated on the company's most recent quarterly conference call that,

There's no contemplated distribution cuts at ETP, whatsoever. We've not looked at any scenario where that would be appropriate or necessary. It's just not – we just don't see that...Our distribution cuts are not required at ETE. And we take our obligation to our unitholders very, very seriously. We have a duty to maintain our distributions. But everybody knows, obviously, that's an option to the extent of that we need access to distributions to maintain our financial health at ETE; would we reach in to that bucket, it would be the last one we'd reach to, but it's certainly possible.

Despite all the rhetoric, the underlying numbers suggest that the distribution isn't exactly on solid ground right now. For 2015 Energy Transfer Partners reported a distribution coverage ratio of 0.99 times, meaning it paid out all it earned, and then some. Further, last quarter that coverage ratio was the beneficiary of some tax benefits, which pushed it up to a seemingly more comfortable 1.07 times despite the fact that the company's underlying earnings as measured by adjusted EBITDA fell from $1.53 billion in the fourth-quarter of 2014 to $1.36 billion last quarter due in part to weakness in the company's midstream segment.

As if that tight coverage ratio wasn't enough, the company's pending merger with Energy Transfer Equity complicates things even further. The whole situation has gotten bizarre in recent weeks with Energy Transfer Equity letting its CFO go for reportedly trying to scuttle the deal by calling Williams Companies' investors and asking them to vote against the merger. At issue is the $6 billion cash payment that Williams Companies' investors will receive when the deal closes, which Energy Transfer Equity will be funding with an equal amount of new debt. That debt would result in the "mutually assured destruction" of the combined company according to reported comments made by Energy Transfer Equity's now former CFO to Williams' shareholders. If that is the case, the deal going through under its current terms could result in the payouts of all companies involved being cut in order to pay down that added debt.

Investor takeaway
While the CEO of Energy Transfer would beg to differ, the payouts of his companies and those he's seeking to acquire look to be on very shaky ground right now. As things stand, all four companies need to see a lot of things go right, and quickly, including a vast improvement of commodity prices and a thawing out of the capital markets. Otherwise, these companies might not have any choice but to reduce their investor payouts until industry conditions improve.