As energy dividends fall to declining oil prices, here's a place you may want to look at for safety.

8point3 Energy Partners owns everything from massive solar systems to rooftop systems like this one. Image source: SunPower.

Dividends in the energy sector are under threat from low oil and natural gas prices, which have reduced cash flows for companies across the industry. But that doesn't mean all energy dividends are feeling the pressure.

Renewable energy companies have launched companies called yieldcos, which own renewable energy projects and pay these long-term, contracted cash flows to investors in the form of dividends. And a dividend like 8point3 Energy Partners' (CAFD) 6.2% yield is about as safe as it gets in energy these days.

Why this dividend is better than most
Yieldcos became a popular financing mechanism in 2014 and 2015, with NRG Yield (CWEN -0.34%) and TerraForm Power (TERP) leading the way. But the yieldco market fell apart shortly after 8point3 Energy Partners was launched because of a few bad quarters from NRG Yield's wind farms and over leverage at TerraForm Power's parent SunEdison. The result was rising dividend yields and less confidence in future growth. Still, 8point3 Energy Partners outperformed its rivals. 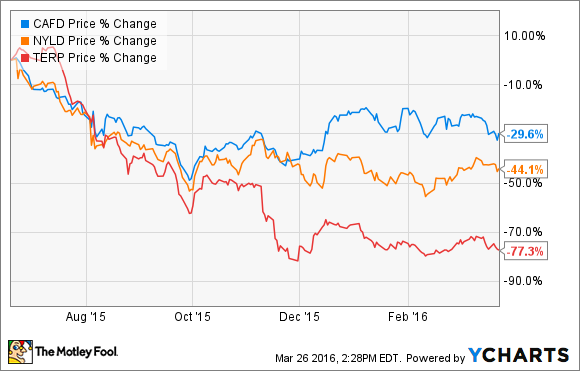 One of the big differences between 8point3 Energy Partners and other yieldcos is its conservative financial structure. The company isn't using an outsized amount of debt to buy projects, reducing risk, and it has parent companies with a long history of solar project performance.

A steady parent matters
The problem brewing at a lot of yieldcos is a weak parent company. Abengoa Yield (AY -0.58%) has been brought down by the insolvency of its parent, which could lead to a cross-default at the yieldco. TerraFrom Power has been plagued by the potential bankruptcy of its parent, SunEdison, as well.

NRG Energy has a much more steady parent, but it's had performance issues at wind farms, which have a much more variable resource than the sun.

8point3 Energy Partners' parents are First Solar and SunPower, the two largest solar project developers in the U.S. and two of the longest lasting solar companies. They balance each other from a governance standpoint, assuring that the company doesn't pay too much for assets and doesn't get over-leveraged. They also provide a steady flow of projects with predictable performance and returns for the yieldco.

It's also worth noting that both companies run profitable solar operations with conservative balance sheets of their own. That gives 8point3 Energy Partners a more stable foundation from which to grow on.

A dividend that will keep growing
Just last week, 8point3 Energy Partners increased its dividend to $0.2246 per share on a quarterly basis, a jump of 3.5% in just the last quarter. With a solid line of projects that could be dropped down from SunPower or First Solar, a conservative balance sheet with room for debt if necessary, and a lower yield than many competitors I think this is a dividend with room for growth. And since most projects it buys have 20 years or more in contracted cash flows this dividend is about as safe as it gets in today's energy market.

Maybe it's time to start considering renewable energy dividends in your portfolio.

Travis Hoium owns shares of 8point3 Energy Partners LP, First Solar, and SunPower. The Motley Fool has no position in any of the stocks mentioned. We Fools may not all hold the same opinions, but we all believe that considering a diverse range of insights makes us better investors. The Motley Fool has a disclosure policy.