Find out if this unique REIT is worth buying at today's super low prices, and just what risks potential investors are taking on if they do.

It's a well-known rule of thumb that if a yield seems too good to be true, it often is. On the other hand, occasionally the market will offer unique high-yield opportunities that actually represent high-quality long-term income opportunities.

Over the past year, Cor Energy Infrastructure has suffered more than its peers as energy prices have cratered. 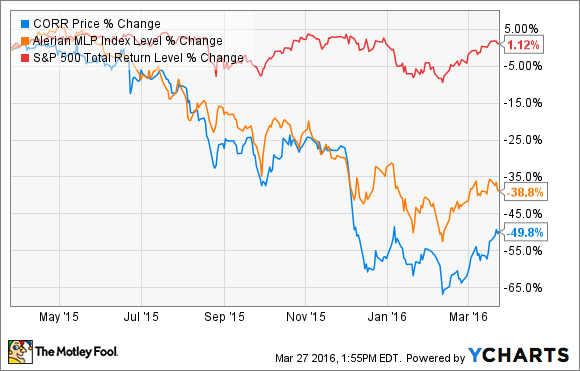 Is Cor Energy Infrastructure a mispriced, high-quality stock that could potentially make a bundle in the coming years? Or is it a value trap to be avoided? Let's take a look at the company's financials and its business model to find out.

2015 results paint a bright picture of the business

In fact, thanks to the closing of the $257 million acquisition of the Grand Island Gathering System, Cor Energy Infrastructure was able to achieve some pretty impressive growth, especially in terms of AFFO per share, which is what funds the quarterly dividend.

In addition, management announced seemingly good news regarding the REIT's other assets, including a 10-year contract extension with the Department of Defense on its Omega pipeline and completion of $10 million in capital improvements on its Portland terminal facility.

Cor Energy believes its current $0.75-per-quarter dividend remains sustainable, although it warned investors not to expect any short-term payout growth because of challenging market conditions.

The payout profile seems to be stable, but ...

The most important aspect to any dividend investment is whether the payout is sustainable and capable of growth. Cor Energy Infrastructure Trust's sky-high yield appears to be well covered by its cash flows. However, Wall Street has a negative outlook on the REIT's ability to grow its dividend in the future.

Of course, analysts are notorious for extrapolating short-term trends into the future, which means that should energy prices recover over the next few years -- and Cor Energy's share price along with it -- it might very well be able to use much lower cost equity to fund accretive growth opportunities and beat market dividend growth expectations.

However, before you run out and load up on shares of Cor Energy Infrastructure, understand that there is a good reason investors seem so skeptical of its dividends' ability to survive the oil crash.

... the legal risk to cash flows explains why shares are so cheap
To understand why Cor Energy is trading at such a high yield, you need to understand the biggest risk to the cash flows underpinning its dividend.

Two of the REIT's biggest customers, Ultra Petroleum, and Energy XXI, are heavily distressed by enormous debt loads and on the verge of bankruptcy. For example, Energy XXI announced on Feb. 16 that it was choosing to default on some of its senior bonds while it negotiated with lenders, and on March 4 the company announced that creditors had obtained waivers that would allow its operations to continue.

Meanwhile, Ultra Petroleum announced on March 2 that it was negotiating with its creditors to try to avoid default on some of its unsecured loans. At least some of these creditors have agreed to forgo declaring the company in default, at least for now.

Cor Energy Infrastructure's management has long argued that its risks from potential bankruptcies of its two largest customers don't pose a significant risk to its AFFO. After all, even in the event of bankruptcy the companies would still need Cor Energy's assets to transport oil and gas to market to generate cash flows to pay off creditors. However, a recent legal ruling has shown that this might not be true, especially should energy prices start falling again and make creditors less accommodating.

On March 8, a judge ruled that bankrupt Sabine Oil and Gas Corp. was legally allowed to break two of its pipeline contracts, because they were "unnecessarily burdensome." Pipeline operators and midstream MLP investors have long seen these "take-or-pay" contracts as the basis for cash-flow security that provided resilience to their payouts, even in the face of the worst oil crash in over half a century.

While Cor Energy Infrastructure's contracts with Ultra Petroleum and Energy XXI are structured so that its rents are counted as operating expenses, and thus have priority over even debt repayment to creditors, this court ruling may allow Ultra Petroleum and Energy XXI to be able to renegotiate lower rents should creditors decide to force one or both companies into bankruptcy. This situation would reduce AFFO and might force the REIT to cut the dividend.