Please ensure Javascript is enabled for purposes of website accessibility
Log In Help Join The Motley Fool
Free Article Join Over 1 Million Premium Members And Get More In-Depth Stock Guidance and Research
By Joe Tenebruso - Apr 11, 2016 at 10:32AM 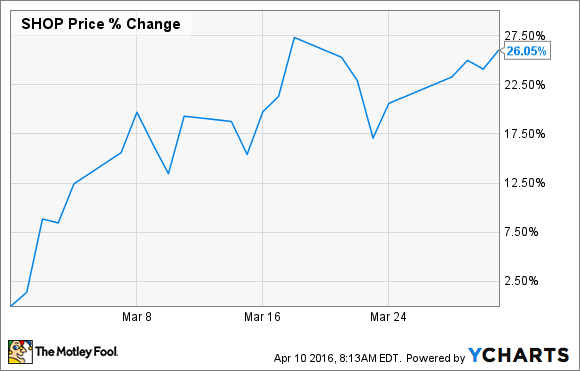 What: Shares of Shopify (SHOP 4.92%) surged 26.1% last month, according to data provided by S&P Global Market Intelligence. The provider of cloud-based commerce solutions for small- and medium-sized businesses saw its stock price boosted by an analyst upgrade as well as rumors that the company could be a takeover target.

Analyst Brendan Barnicle noted that Shopify's valuation had improved significantly after its stock price pulled back nearly 40% from its 52-week high of $42.13. Barnicle also highlighted the inability of Shopify's larger competitors to move down-market in order to compete with Shopify in its primary niche as an e-commerce solutions provider to small businesses. Additionally, Barnicle made positive comments regarding the inherent operating leverage in Shopify's business model:

While gross margins on the payments business should remain lower than on the subscription business, the target operating margins are similar for both businesses. Because customers usually start with subscriptions and then add payments, the incremental payment revenue has very limited customer acquisition costs, which we believe is driving improving leverage.

Now what:  Further boosting Shopify's stock price was a report by Re/code that tech titan Google has assembled an "early working list" of acquisition targets in the areas of cloud computing and workplace applications, including Shopify.

Shopify would fit nicely under the Alphabet (GOOG 1.92%)(GOOGL 1.72%) umbrella. The move would bolster the company's e-commerce and mobile payments solutions. And as fellow Fool Leo Sun points out, Google could use Shopify's features to strengthen its Google Wallet, Android Pay, and Google Express services.

With a market cap of only about $2.4 billion, Shopify could be an attractive acquisition for multiple cash-rich tech leaders. In addition to Alphabet, I wouldn't be surprised to see a bid for Shopify from the likes of Facebook, Amazon, and/or Ebay. Importantly for investors, however, is that Shopify -- as the leading cloud-based commerce platform for small businesses -- appears poised to deliver strong gains in the years ahead, whether or not an acquisition bid materializes.