Please ensure Javascript is enabled for purposes of website accessibility
Log In Help Join The Motley Fool
Free Article Join Over 1 Million Premium Members And Get More In-Depth Stock Guidance and Research
By Travis Hoium - Apr 17, 2016 at 9:00AM

Despite massive growth in solar installations, the industry has seen a lot of failed businesses. Here are three of the biggest reasons why.

Over the past decade, the solar industry has been one of the fastest-growing industries in the world. In 2005, there were only 5 GW of solar energy production installed in the entire world, and in 2015 alone, there was 59 GW installed, equating to nearly 5 GW every single month.

But that growth hasn't been all roses for solar companies or their investors. Along the way, solar giants like Suntech Power, Q-Cells, LDK Solar, and SunEdison (SUNEQ) have gone from market darlings to bankrupt, or close to it. If you're looking at investing in the growth of the solar industry today, here's what you need to know.

Technology is hard, but it matters
One of the hidden secrets of the solar industry's growth is that it wasn't built by Silicon Valley investments,a spectacular new invention, or even on the back of improving technology. In fact, most companies that invested in new solar technology are now dead. The past decade was driven by Chinese banks giving billions of dollars in loans to companies to buy off the shelf equipment to build solar panels. This helped lower costs with scale and created such an oversupply that it forced prices even lower to keep plants running, leading to a lot of the decline in solar installation costs over the past decade.

But the companies building commodity solar panels in China aren't raking in billions in profits. They're duking it out against one another for every sale. They're competing on cost, not technology. And companies that have the best technology are winning the long game. First Solar (FSLR 3.09%) and SunPower (SPWR 3.46%) have superior panel efficiency to commodity solar panel producers like Trina Solar, JinkoSolar, and Canadian Solar and are able to generate more value as a result. Despite First Solar and SunPower making 2.5 GW and 1.2 GW of panels, respectively in 2015 -- lower than 5.7 GW at Trina, 4.5 GW at JinkoSolar, and 4.7 GW at Canadian  Solar -- they have much larger market caps. 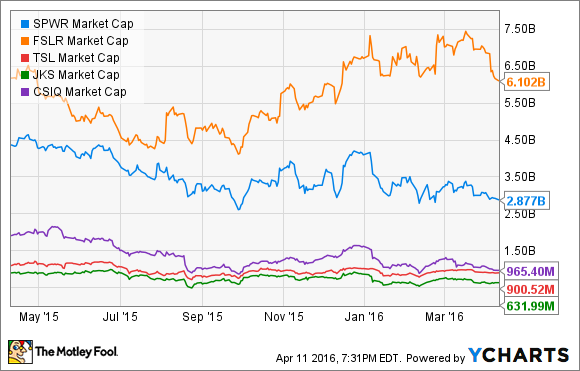 Bankability is the hidden key in renewable energy
One thing companies are finding out the hard way is that bankability matters. What that means is that a bank or debt investor's confidence in your company, technology, and energy production projections matter a lot to the success of your project. You can have the most efficient cells in the world, but unless you have the capital to make it happen all the best technology in the world means little.

Let's take a simple example and say that two companies are bidding to sell energy from a new project. Construction will cost $10 million, the system will produce 100,000 MWh of energy per year, the contract is for 20 years, and at the end of the contract life, the system is worth $0. The only difference between the companies is their cost of capital.

Table calculations by the author.

You can see that Company A can bid much lower for the energy contract to meet its cost of capital than Company B. This is why SunPower's borrowing rates of LIBOR plus 1.5%-3% and First Solar's rates of LIBOR plus 2.25%-3.5% are such an advantage over competitors. Case in point: SunEdison recently refinanced some of its debt at a whopping LIBOR plus 10%. That's a rate that will sink a company quickly. And that's exactly what is happening.

Debt and financial engineering is a path to value destruction
Financial engineering is a tempting strategy in the renewable energy industry. Projects have consistent cash flows, usually with reliable counterparties, and that can lead companies to look at financing options like securitization, warehouse vehicles, yieldcos, and other complex financial products. But unless the underlying company is on solid financial footing, this can lead to disaster by overleveraging future operations.

SunEdison is, perhaps, the best example of financial engineering gone wrong. It created yieldcos TerraForm Power and TerraForm Global to buy renewable energy assets, assuming their cost of capital would be low, and thought new equity offerings would allow an almost endless supply of capital to buy projects. As a backup plan, it built warehouse vehicles to hold assets in case the yieldcos couldn't buy them. But when the market turned on SunEdison, its cost of capital skyrocketed and now it's on the verge of collapse. The constant need for funding to both build and own projects, combined with those rising interest costs to sink the company.

SolarCity (SCTY.DL) has struggled with some market confidence in its financial engineering business model as well. It's trying to use a combination of tax equity, aggregation facilities, and securitizations to generate enough cash to fund operations on an ongoing basis, keeping a slice of the cash flows for itself, just like a bank would do. The problem lately is that borrowing costs are on the rise. Investors have lost confidence that very aggressive projections will ever come true and that's a big reason for the stock's drop over the last two years.

In renewable energy, financial engineering works until the moment investors lose confidence in you. If you don't have a backup plan and/or a lot of cash, that can leave you in a world of hurt.

The warning signs to watch for
Over the last decade, the solar industry has learned the hard way that technology matters, confidence from lenders matters, and financial games rarely pay off in the end. And if you're looking at solar as an investment option, I would look first at companies with advantages on those three points -- because betting the other way has been a great way to destroy value in the long term.