"When we own portions of outstanding businesses with outstanding managements, our favorite holding period is forever."
-- Warren Buffett

Investing isn't about jumping into a stock and then selling as soon as the business performs well enough to boost the share price. That approach is tantamount to a gardening strategy that involves "pulling out the flowers and watering the weeds," as Peter Lynch said.

Of course, no business is perfect and no stock is a sure thing. But there are many investments that get better with each passing year. Here two examples of stocks that appear to have what it takes to keep shareholders happy for decades into the future.

Buy Disney for its diversity
Disney's (NYSE:DIS) stock may be down lately, but its business is posting growth that rivals just can't match. Yes, the media division is stumbling as broadcast TV gets disrupted by Internet-delivered content.

Disney's box office business and its consumer products division, though, both improved earnings by roughly 30% last year, which contributed to a 13% spike in overall operating profit. The House of Mouse produced nearly $15 billion of earnings in fiscal 2015, for a 36% jump in the last two years. That's the benefit of having a diverse revenue stream that touches every segment of the entertainment industry from cable TV, to retailing, to feature films, to theme parks and resorts.

In addition, Disney's portfolio of intellectual property provides a deep well of assets it can tap to keep operating results churning higher. This past year provided a dramatic example of the company's unique ability to build and monetize blockbuster entertainment brands.

Shareholders have seen a version of this multiyear rollout succeed with Marvel Avengers content, and they'll see it repeat again and again in the years ahead.

Buy Home Depot for its efficiency
With its store count staying put, Home Depot (NYSE:HD) has had to earn revenue growth the hard way -- by boosting sales at its existing locations. The home improvement giant is delivering on that goal in spades recently: Customer traffic soared 4.1% higher last year, marking an acceleration from 2014's already-strong 3.7% gain.

Even better news for shareholders is the fact that Home Depot's key efficiency metrics are rising sharply -- and trouncing rival Lowe's (NYSE:LOW). Its profitability is nearly twice that of its smaller competitor and its return on invested capital has more than doubled since the housing market crises: 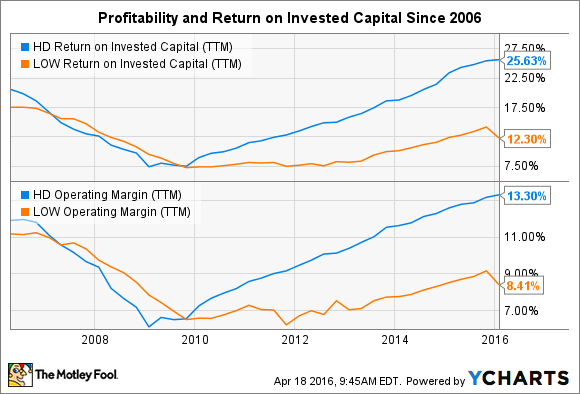 That outperformance reflects the quality of Home Depot's management team, led by CEO Craig Menear. These executives aren't simply celebrating their recent market-thumping wins, either. Menear plans to invest heavily in improving the retailer's e-commerce infrastructure this year to continue beating back the challenge from online-only competitors.

The company is in an ideal position to benefit from what Lowe's has described as an industry that's primed for unusually strong growth "at least through 2017."

At the same time, Home Depot aims to reach a 35% return on invested capital by the end of fiscal 2018. That should fund a big improvement in what's already one of the market's largest capital return programs. Home Depot promises to deliver half of its earnings to shareholders as dividends while spending billions more on stock repurchases.

Dealing with change
Home Depot and Disney are both posting record results even though their core industries are going through major challenges. Brick-and-mortar retailers are struggling with low-cost e-commerce competition while the media business is scrambling to adjust as TV habits shift online. Yet these two market-leading giants are adapting well to the new market realities, which will be an essential skill for them to employ over the coming decades.