Management at the iconic beverage and snack brand company had already warned that growth will be hard to come by in 2016, and the first-quarter earnings report it just turned in matches that assessment.

PepsiCo (PEP 1.34%) released credible, if not galvanizing, first-quarter 2016 results on Monday. The report didn't surprise investors, as management had previously projected that revenue would essentially be flat in 2016. Let's look at highlights of the filing, including management's comments, and peek ahead at what's in store for the remainder of 2016. 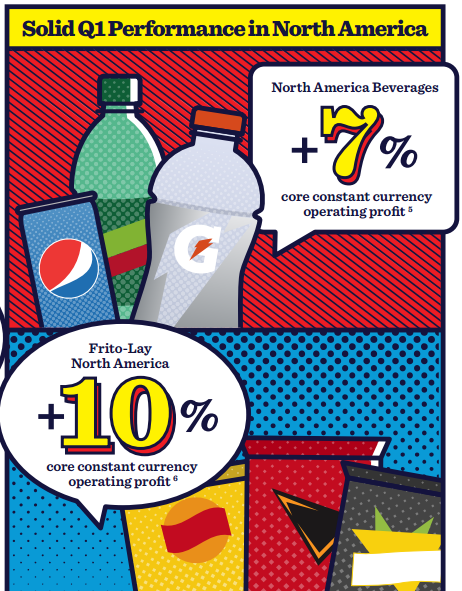 This piece of PepsiCo's quarterly earnings infographic emphasizes the contribution of the North American snack and beverages businesses to overall results in Q1 2016. SOURCE: PepsiCo,

What management had to say
PepsiCo's management has in recent quarters pointed to the sluggish global economy when discussing quarterly results. On Monday, CEO Indra Nooyi chose to highlight positive aspects of PepsiCo's business performance, including currency-neutral revenue growth and improvement in adjusted margins (i.e. margins which have been adjusted for items the company believes affect comparability with prior quarters):

We delivered strong first quarter operating results driven by balanced execution of our commercial agenda and productivity programs. Our marketing initiatives and new product launches are generating solid organic top line growth, and our focus on driving greater efficiency throughout our operations contributed significantly to attractive core gross margin expansion... We are off to a strong start to the year and that gives us added confidence in achieving our financial objectives for 2016.

Looking forward
PepsiCo reaffirmed its full-year guidance on Monday, which includes roughly flat revenue growth, and a 2% increase in adjusted earnings per share, to $4.66. As PepsiCo notes, if it hits this EPS target, the increase will be equivalent to 8% on a currency-neutral basis.
The company also reaffirmed a number of other targets, including its $1 billion productivity goal for 2016, total dividend issuance of $4 billion, and share repurchases of $3 billion. Crucially, the company still projects $10 billion in operating cash flow, and $7 billion in free cash flow, from which it will be funding its dividends and share buybacks.
As I discussed in my earnings preview, PepsiCo is attempting to reduce its reliance on carbonated soft drinks within its beverage business, as sales volumes of Pepsi, and especially Diet Pepsi, are experiencing a long downtrend. Expanding the company's portfolio of "still" beverages, including bottled waters, juices, energy drinks, teas, and coffees, will necessarily take time. Productivity improvements should free up additional cash flow over the next few years for the purchase of smaller, non-carbonated brands, and increased marketing for the still portfolio. But so far in 2016, PepsiCo's business results reflect the hard work it has done to balance out its revenue mix, and at least for the next two to three quarters, management is indicating that the company's growth prospects will remain tepid.