In 1989 and 1990, Berkshire Hathaway paid $290 million for its 10% stake in Wells Fargo. Today, the dividends from that investment alone add up to more than $700 million a year. The shares themselves, meanwhile, are worth more than $23 billion.

Berkshire picked up shares of Wells Fargo for a substantial discount in 1990 due to a severe commercial real estate crisis that was rolling through California at the time, and threatening many of the region's banks. This speaks to the importance of Warren Buffet's maxim to be "greedy when others are fearful and fearful when others are greedy."

Just as importantly, Berkshire's stake in Wells Fargo also speaks to the benefit of investing in well-managed companies that make a habit of increasing their dividends. When the Buffet-led conglomerate bought into Wells Fargo, the bank was distributing the equivalent of only $0.025 per share. That has since grown 15-fold, to $0.375 per share today. 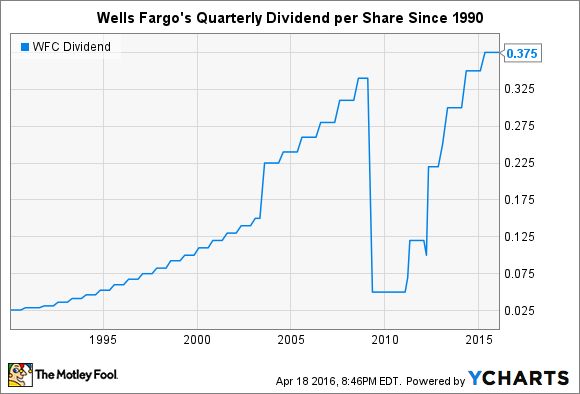 There are three things that income investors should factor into their analysis when picking dividend stocks. The first is the dividend yield, which measures how much a company pays out in dividends each year relative to its share price. If a company's stock costs $100 a share, for instance, and it pays out $2.50 a share each year in dividends, then its yield is 2.5%.

A higher yield is better than a lower yield if your objective is to generate income. Yet, a yield that's too high can spell trouble, as yield also reflects risk. One benchmark to use in this regard is the yield on the S&P 500, which is currently 2.2%. As a general rule, yields that are more than twice this figure should be viewed skeptically.

The second metric that should factor into one's decision is the payout ratio. This reflects the percentage of net income a company distributes. Well-run banks like Wells Fargo will pay out roughly a third of their income to shareholders. A payout ratio that's as much as twice as high as this isn't necessarily a bad thing, though it could limit a company's ability to increase its quarterly distribution in the future.

The last metric that should factor into a dividend investor's analysis is the history of dividend increases. The objective here is to identify companies that have a demonstrated commitment to growing their payout consistently. As the chart above shows, for example, absent the temporary disruption to Wells Fargo's dividend during the financial crisis, the nation's third-biggest bank by assets has proven convincingly during the past three decades that it is both willing and able to boost its payout annually.

In sum, while nobody should expect to match the performance of Berkshire Hathaway when it comes to picking stocks, you can benefit similarly from investing in companies that, like Wells Fargo, will pay you substantially larger dividends one or two decades from now than they do today.