Procter & Gamble (PG -6.23%) shares are just barely beating the market heading into its quarterly earnings release on April 26. In fact, the stock's 6% gain puts it right in the middle of the pack among the 30 Dow components.

Wall Street expects the consumer goods titan to post a 13% sales decline to $15.8 billion while earnings drop to $0.81 per share from $0.89 per share a year ago. However, those headline figures don't begin to describe P&G's business over the last quarter. Here are a few other key trends for investors to watch.

Organic growth
Organic growth is the foundation for P&G's business, which is why it was such good news for shareholders that the metric improved sequentially last quarter for the first time in almost two years. On the plus side, the company saw solid expansion in its most profitable market, the U.S, as overall sales rose 2%. Detracting from that win was the fact that competitors like Unilever (NYSE: UL) managed greater, and higher-quality, organic growth. Unlike Unilever, P&G's sales growth hasn't included any volume improvement, but rather has depended entirely on higher prices.

Unilever last week posted 5% organic growth that was split evenly between volume and pricing improvements. If things go according to management's plan, look for P&G to beat the 2% uptick it announced last quarter. But sales volume numbers will be key to determining whether the recent sales rebound has solid momentum or not.

Profitability
While CEO David Taylor and his executive team predict only modest revenue growth for the fiscal year that ends in August, executives have an aggressive target for profit gains. Yes, EPS is likely to drop to around $0.81 per share in fiscal Q3. But keep in mind that underlying profitability is expanding at a stronger pace than the reported figures imply. Last quarter, for example, P&G posted a 9% profit boost, yet earnings actually spiked higher by 21% after accounting for exchange rate changes and brand divestments.

Over time, investors should expect to see more improvements in profitability as cost cuts combine with brand divestments to create a more efficient operating structure. Look for P&G to maintain its solid lead over rivals in this department: 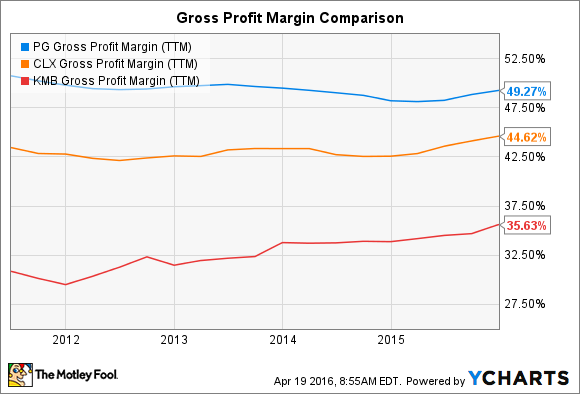 Cash flow
Dividends and share repurchases have long been a key portion of the return that a shareholder can expect from owning P&G's stock. Yet that cash component is playing an even larger role these days since the company is selling off a large part of its company through brand divestments.

Thanks to that shift, shareholders will soon own a smaller business, but one that's ideally growing at a faster pace and generating better profits. In the meantime, P&G plans to shower investors with cash to the tune of $18 billion per year through fiscal 2019. Cost cuts, along with the one-time cash infusion that comes from selling major brands like Duracell, will fund some of those returns, but the key number to watch will be what P&G calls its "free cash flow productivity." This represents the percentage of net earnings that the company converts into excess cash that it can distribute to shareholders. For years, the target for that metric has been around 90%, but recent efficiency gains have boosted it to well over 100%.

As long as P&G can keep converting nearly all of its profit into cash, investors have every reason to believe it will hit its target of delivering $70 billion to shareholders through dividends and stock buybacks, even if organic sales growth doesn't quickly return to fiscal 2014's solid 3% pace.