Please ensure Javascript is enabled for purposes of website accessibility
Log In Help Join The Motley Fool
Free Article Join Over 1 Million Premium Members And Get More In-Depth Stock Guidance and Research
By Travis Hoium - Apr 20, 2016 at 9:09AM

It may not be all roses for SolarCity as competition heats up in residential solar.

Since the beginning of 2015, SolarCity Corp (SCTY.DL) has lost 44% of its value despite more than doubling its installations. The company has faced problems meeting its own growth plans, and customer-acquisition costs are on the rise, as well. That's led to investors questioning whether or not the company can live up to its valuation. Here are the biggest challenges it faces this year. 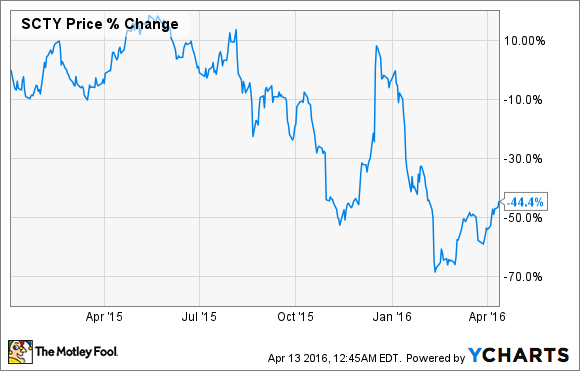 Borrowing costs drive everything
One of the keys to generating value in the solar industry is having a low cost of capital. In short, cost of capital is the rate at which a company can raise financing through either debt or equity. The lower your cost of capital, the more aggressively you can price solar energy. The cost of capital is also known as the discount rate when doing a discounted cash flow model, which represents the present value of a series of cash flows over time.

SolarCity has acknowledged this in its own projections, including a sensitivity analysis with different discount rates. Typically, the company has used a discount rate of 6%, but it also includes discount rates of 4% and 8%, as is shown below. The lower the discount rate, the more value created. The figure below should be compared to costs per watt of $2.71 at the end of 2015. 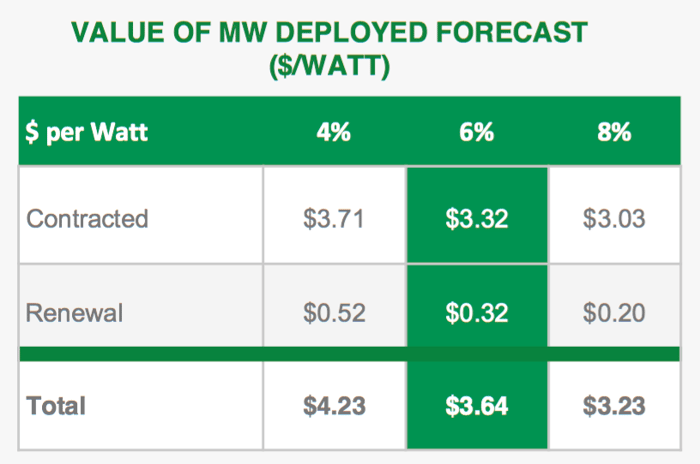 The challenge in 2016 is that borrowing costs are going up -- as I recently showed with securitization rates -- and the stock is going down. So the cost of capital is going up, as well. If this trend continues, SolarCity will have to use a higher rate than even 8% to accurately depict its true value creation.

What investors should keep an eye on is the rate trends for securitizations and short-term borrowing rates. If those start to rise, it will become a bigger problem than it is today and will affect SolarCity more than others because of its scale and the fact that a vast majority of its business is residential solar. The company has bet a lot on securitization as a source of financing long-term and right now the rates aren't trending in a good direction for SolarCity.

Customers are getting more sophisticated
For most of its history, SolarCity has focused almost all of its energy on the solar lease or power purchase agreement. Under this structure, SolarCity owns the solar installation, and customers pay for electricity over 20 years of the contract, usually with increasing rates over time. Based on the value-generation statistics above, there's a lot of value in each installation, which averaged a cost of $2.71 per watt last year.

But customers are starting to trend away from the lease and rising rates to competitively bid solar installations with loans attached. GTM Research predicts that leases will fall from 72.3% of the market in 2014 to 57.2% in 2016, and will fall further from there.

New platforms like Google's Project Sunroof, EnergySage.com, and Pick My Solar are making it easier than ever to get competitive bids for everything from leases to loans. When you do the math, loans save customers more money.

As customers get more savvy about their solar purchases, SolarCity will face renewed competition against its bread-and-butter solar lease model. And that's a challenge that can't be overlooked this year because without its low-cost financing leverage, SolarCity has little differentiation from the competition.

2016 may not be as great as expected
This should be a great year for SolarCity given the extension of the solar investment tax credit, and continued low interest rates. But the company's success has brought new competitors to the market that bring new business models that could prove challenging. And SolarCity's own cost of capital is rising, making it more expensive to finance projects long term.

If these trends keep going the wrong direction for SolarCity, we could be in for another rough year for the stock, continuing a trend investors don't want to see going forward.