Please ensure Javascript is enabled for purposes of website accessibility
Log In Help Join The Motley Fool
Free Article Join Over 1 Million Premium Members And Get More In-Depth Stock Guidance and Research
By Lee Samaha – Apr 27, 2016 at 11:02AM

The staffing company's results and outlook are always a useful barometer of economic growth. Here is what they revealed about the first quarter.

Staffing company Robert Half International's (RHI 0.31%) results are always interesting because they offer a lot of color on prospects for the global economy. Simply put, there aren't many better gauges of economic growth than employment trends. The company's first-quarter earnings and guidance indicate a moderately growing economy beset with caution on behalf of employers and characterized by unevenness in demand. It's OK, but it could be better.

In short, revenue and earnings came in line with management's guidance. Turning to management's expectations for the second quarter:

Revenue guidance for the second quarter implies a slowing in the growth rate to 6% from the 8% reported in the first quarter.

What happened within the quarter?
On a slightly disappointing note, growth appeared to slow during the quarter. On the earnings call, management outlined how global temporary and consulting staffing revenue growth slowed to 6.3% as it exited the March quarter (compared to a growth rate of 6.7% in the quarter). Growth in the first two weeks of April was only 5.5%.

Moreover, CFO Keith Waddell disclosed that "global permanent placement revenue growth rates accelerated during the first part of the quarter then moderated thereafter, with March revenues growing 1.5% compared to 8.6% for the full quarter."

It's probably not a good idea to draw hard conclusions from a week's trading figures, but there is little doubt that the environment remains one of moderate growth.

What management said
As ever when Robert Half reports, analysts want to hear management's view on the employment cycle. In order to explain their response, here is a chart comparing temporary and consultant staffing trends with permanent.

In usual recoveries, the economy accelerates to a point whereby permanent employment growth rates start to significantly exceed temporary growth -- the reason being that temporary employment declines relatively less than permanent in the slowdown. When the economy eventually recovers strongly, companies feel more comfortable in making permanent hires, and permanent growth rates tend to be very strong due to easier comparisons.

As you can see below, as yet, U.S. perm isn't significantly outpacing temporary hiring, and internationally, permanent employment hiring growth is currently trending below temporary growth -- this isn't a roaring global economy. 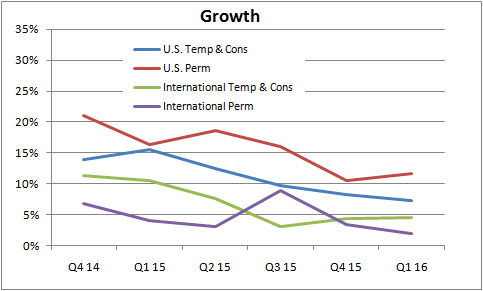 Addressing this issue, CEO Max Messmer declared that the typical "white-hot hyper demand" generating "very high double-digit" growth rate for permanent placement "hasn't happened and notwithstanding the fact that we're in year seven or whatever of this cycle." He went on to say that he still wasn't seeing it and that "instead we continue to slug it out in this relatively sluggish macro environment."

In addition, Messmer talked of clients being cautious due to macroeconomic uncertainty and sales cycles lengthening (something that reduces growth at Robert Half) even in areas of relative strength such as finance, accounting, and technology.

Looking ahead
Notwithstanding the remarks on linearity in the quarter (Robert Half finished the quarter with a weaker growth rate than that recorded during the quarter) and ongoing sluggishness in the economy, the company continues to generate solid revenue and earnings growth.

Going forward, Robert Half's prospects will remain tied to the economic cycle. If growth improves, then its permanent staffing solutions could benefit disproportionately, but for now, its temporary and consultant staffing operations remain the key to its earnings.

Lee Samaha has no position in any stocks mentioned. The Motley Fool recommends Robert Half International. Try any of our Foolish newsletter services free for 30 days. We Fools may not all hold the same opinions, but we all believe that considering a diverse range of insights makes us better investors. The Motley Fool has a disclosure policy.