No surprises here: Ford sets a record for quarterly profit on the back of strong-selling SUVs and full-size trucks.

When it came down to predicting Ford Motor Company's (F 3.89%) first-quarter results, we all pretty much knew things were going well, really well. We knew Ford was selling a ton of high priced F-Series trucks. We knew Ford's market share and sales mix was improving in Europe, and that China was powering its Asia-Pacific region to its best results recently.

But we didn't know results were going to be this good: all-time-record-quarter good. That's what investors were handed today during the automaker's presentation; here are some of the juicy details.

Highlights
Ford's top-line revenue jumped $3.8 billion from last year's first quarter to $37.7 billion during the first three months of 2016, driven by rising wholesales, which checked in at 1.7 million units. Thanks to sales of highly profitable vehicles in the U.S. market, Ford was able to turn that expanding revenue stream into $3.8 billion in pre-tax profit – a strong $2.1 billion jump over last year's quarter. 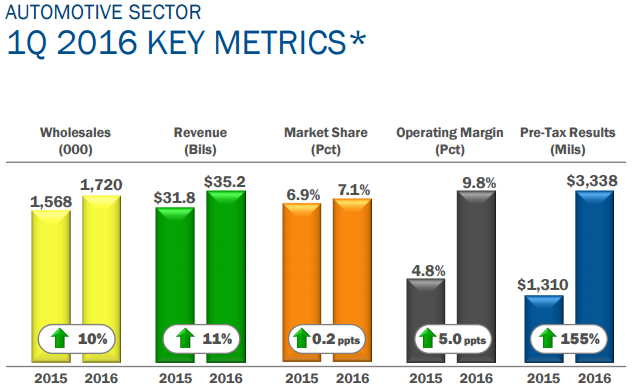 One of the more eye-popping statistics out of Ford's first-quarter data was certainly the operating margin in North America. It jumped 510 basis points, or more than 5 percentage points, from 7.8% to 12.9%, during the first quarter -- which is a pretty ridiculous figure in the automotive industry.

It was especially surprising to me, because Ford posted pretty substantial increases in fleet sales in the U.S. during the first quarter, which will level off during the second half of the year. But a lot of those incremental fleet sales were to daily rental companies, which have historically been associated with lower margins. Apparently, judging by North America's near-13% operating margin, Ford has even improved the margins on those fleet sales, and all three segments now represent valuable business.

Outside of North America
While investors realize the big story, and big driver of profits, is North America, there were some highlights and lowlights across the globe for Ford. Starting with a highlight: Ford's Europe transformation continues to gain traction.

Also on the rise was Ford's Asia-Pacific region, which posted a 9% gain in sales and 18% gain in revenue, compared to the prior year's quarter. Market share moved 30 basis points higher, while operating margin moved from 4.6% to 8.2% and pre-tax results more than doubled to $220 million.

But, of course, there was pain somewhere, and that somewhere was in South America, where Ford's wholesales dropped 38% and revenue plunged 44%. Pre-tax profits dropped from negative $189 million to negative $256 million with an ugly negative 30.4% operating margin. Ouch.

It takes quite a bit to move major automakers' stocks substantially in one trading session, but it was a strong enough quarter to send Ford's stock up nearly 4% Thursday. Ironically, investors are still not sold on the stock despite Ford posting record profits, and David Whiston, an analyst at Morningstar, sums it up perfectly.

"Do these companies actually have to go into a recession to prove that they are really different and much healthier than they used to be?" Whiston said, according to Bloomberg. "So if you're an investor, you're perversely hoping there is a recession just so people will say, 'Oh, it's actually a much better company now, so I'll buy it.'"

Ford has proven it can excel when times are good, but sadly Wall Street is apparently not buying in until it proves it can hit a sinkhole and remain fairly profitable.