Stock and bond returns over the next two decades are unlikely to match the results of the past 30 years. That's a sobering possibility investors ought to prepare for.

On a historic day for the U.S. stock market, stocks are little changed in early afternoon trading on Thursday, with the S&P 500 (^GSPC -0.58%) and the Dow Jones Industrial Average (^DJI -0.75%) (DJINDICES: $INDU) up 0.5% and down 0.25%, respectively, at 12:38 p.m. ET. Traders have perhaps been chastened by today's gross domestic product (GDP) figure, which had the U.S. economy growing at an annualized rate of just 0.5% in the first quarter -- the lowest rate in two years.

From intraday returns, which don't matter, let's move to a timeframe that does: the next 20 years.

First, why is today a historic day for the market? Because at today's bell, the current bull market, which began on March 9, 2009, will have notched up 2,607 days, becoming the second longest bull market in history (in a tie with the one that ran from mid-1949 through July 1956). That's wonderful news for investors, surely.

The McKinsey Global Institute, the think tank of the prestigious consulting firm, has just published a report, the title of which neatly sums up its rather sobering message: "Diminishing Returns: Why Investors May Need to Lower Their Expectations."

Under that scenario, for example, McKinsey forecasts U.S. stocks will generate an annualized real return of 6.5% over the next two decades versus 7.9% over the past three (see the graphic below, which is taken from McKinsey's report).

That would hardly be disastrous relative on a longer-term timescale -- in fact, 6.5% is exactly the historical return over the past century. However, if your retirement planning is based on the record of the past 30 years, the shortfall -- less than one-and-half percentage points annually for stocks -- would have significant implications for your ability to retire when you expect to (or with the level of income you expect).

Needless to say, under McKinsey's "slow growth" scenario, the gap is even wider. 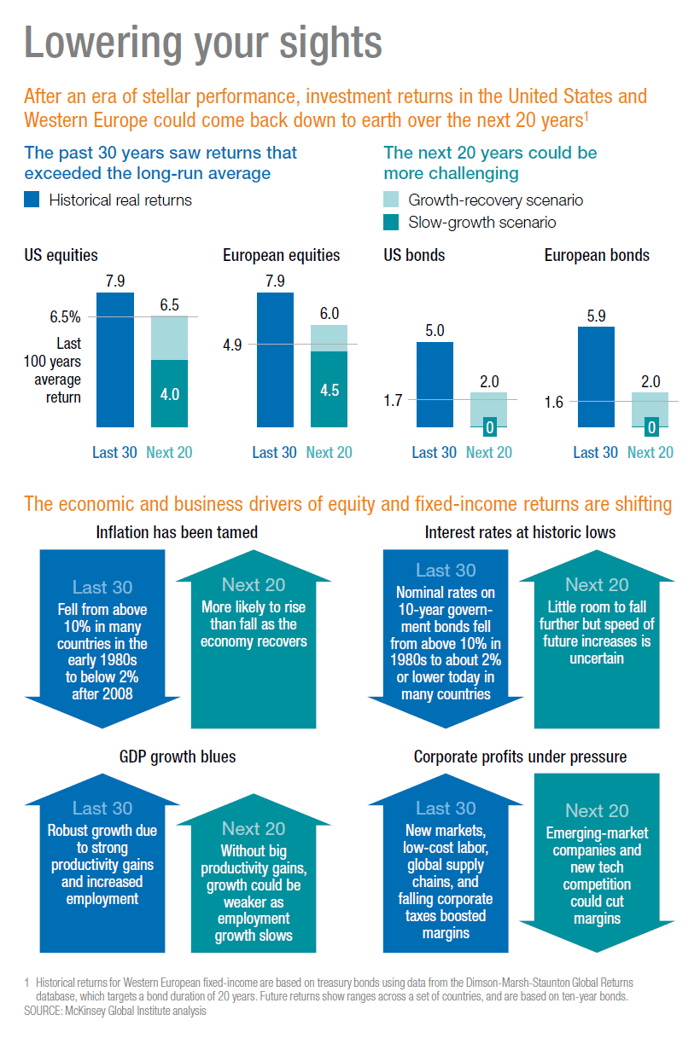 If you want a concrete idea of the impact this could have on savers, McKinsey estimates that to compensate for a two percentage point drop in average returns, "a 30-year-old would have to work seven years longer, or almost double his or her savings rate"!

This Fool is old enough to know that forecasts with a 20-year time horizon have a habit of being terribly inaccurate. It's quite possible things will ultimately turn out rosier than McKinsey's consultants expect. However, I'm not sure that's a bet a prudent investor would want to make when her retirement is on the line. Without sinking into pessimism, I think it's worth heeding McKinsey's warning: Investors may want to lower their expectations and plan accordingly.