Please ensure Javascript is enabled for purposes of website accessibility
Log In Help Join The Motley Fool
Free Article Join Over 1 Million Premium Members And Get More In-Depth Stock Guidance and Research
By Sean Williams - Updated Jun 1, 2018 at 11:43AM

Curious how your income and tax burden stacks up next to other Americans? This 2013 data from the IRS should answer all of your questions.

Tax Day has officially come and gone for another year, but what many Americans don't realize is that being tax-conscious should have no beginning or end date. No one enjoys forking over any percentage of their income to the federal government, but we also know that taxes are necessary so that the federal government has funds to pay for Social Security, Medicare, Medicaid, income security programs, defense, and all of the other various programs that eat up a combined $4 trillion annually.

However, we all know that our federal income taxes can vary wildly from person to person. This is where federal income tax statistics from the Internal Revenue Service can come in handy: They offer us a sneak peek at who's earning what and how much they're really paying. 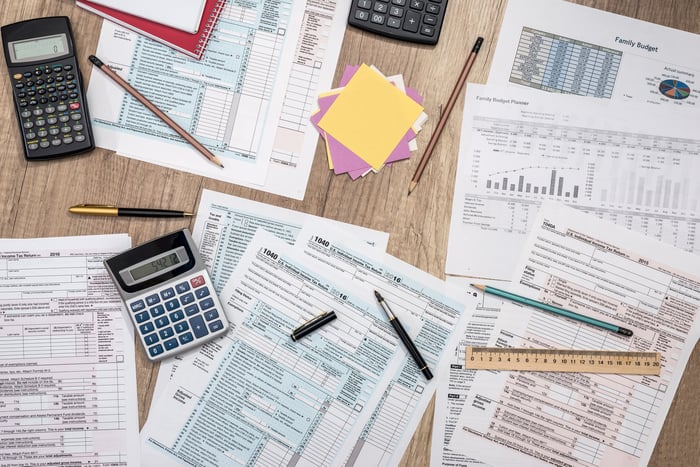 How does your income and tax burden stack up to everyone else?

Recently, the IRS released income and tax-burden data from 2013, which personal finance-based publisher Kiplinger aggregated into an easier-to-understand format. Based on the IRS' income and tax-burden data, we can get a detailed look at how much Americans need to earn to find themselves in the exclusive top 1%. Additionally, the data breaks out what you'd need to have earned in 2013 to find yourself in the top 5%, top 10%, top 25%, and top 50%. Mind you, this data looks solely at federal income and doesn't take into account what tax burden individuals might face at the local or state level.

You'd have needed to earn nearly $429,000 in adjusted gross income (this means after deductions and credits are factored in) to be part of the top 1% in the United States. You'd have needed almost $180,000 just to crack the top 5%, and nearly $128,000 to be in the top 10%. These figures were higher than I would have expected. Conversely, earning more than $36,840 in AGI would have put you in the upper half of income-earners in 2013 -- much lower than I would have imagined.

Most Americans can lower their tax burdens year-round -- here's how

The IRS may collect trillions of dollars annually for the federal government, but there are numerous ways American taxpayers can reduce their tax liability throughout the year -- in some cases regardless of how much they earn.

One of the easiest ways to reduce your tax liability is to invest for your future. Contributing to an employer-sponsored 401(k) or traditional IRA not only helps you save and invest for the future, but can also reduce your income tax liability by the amount of your contribution. A Roth IRA, on the other hand, provides no immediate tax savings and has income limitations on who can contribute. However, investments in any IRA can grow completely free of taxation.

Along those same lines, sticking to your investing strategy for an extended period of time can also be quite beneficial come tax time. Assets, such as stocks and bonds, that are held for one year or less are considered to be short-term holdings by the IRS, and any gains on the sale of those assets will be taxed at your ordinary income tax rate. By comparison, holding an asset for a year and a day or longer allows that asset to be classified as long-term, meaning your capital gains will be taxed at a much lower rate. For those in the top 1%, holding your investments for a longer period of time can mean the difference between paying a 35% or 39.6% tax rate on your capital gains and paying 15% to 20% -- about half the short-term tax rate.

Donating to a cause you believe in is another way Americans can lower their tax liability. Not only does the donation support a cause you believe in, but you'll receive a tax deduction that's commensurate with your peak ordinary income tax bracket -- as long as you itemize your deductions, rather than taking the standard deduction. For example, if your adjusted gross income places your last earned dollar in the 28% tax bracket for a given year, then a donation to an eligible charity can result in a $0.28 deduction for every $1 donated. Donations will favor wealthier individuals, as the deduction on a per-dollar basis will be higher, but Americans of all income levels come out as winners in some way when we donate.

Your home may also be a treasure trove of deductions and credits -- especially if you're a homeowner. Energy-efficient improvements, such as the addition of solar panels or a solar water heater, allow a homeowner to write off 30% of the cost of the equipment and installation, with no upper limit on how much can be deducted. Refinancing your mortgage can help, too. Points (each "point" equals 1% of the principal loan amount) from a refinance (or new mortgage) can be amortized over the life of the loan, helping to reduce your tax liability.

Don't think of Tax Day as a once-a-year nightmare. If you make tax planning part of your routine, it's likely that you'll run into far fewer surprises come tax time -- and pay a lower effective tax rate.