Please ensure Javascript is enabled for purposes of website accessibility
Log In Help Join The Motley Fool
Free Article Join Over 1 Million Premium Members And Get More In-Depth Stock Guidance and Research
By Travis Hoium - May 4, 2016 at 1:15PM

Not all yieldcos are created equal, which investors have learned the hard way.

Yieldcos were once the new "it" product in the energy industry. Renewable energy developers thought they would help lower capital costs and allow them to retain a portion of project ownership long-term. But as the industry fell apart and stock prices dropped, it became apparent that not all yieldcos were created equal.

Below, I'll highlight a few of the differences between 8point3 Energy Partners (CAFD), NRG Yield (CWEN 2.27%), TerraForm Power (TERP), and TerraForm Global (NASDAQ: GLBL), four of the largest yieldcos in the industry. And they've had very different results for a reason. 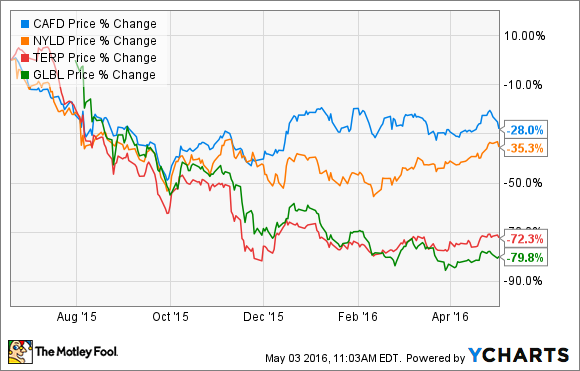 What goes into the yieldco?
The first difference between yieldcos is what assets companies own. For example, 8point3 Energy Partners only owns solar projects built by First Solar and SunPower. That's a competitive advantage because of the high predictability in solar energy production and their solid financial statements as sponsors (which we'll cover more in a minute).

NRG Energy owns wind, geothermal, and solar assets, but it also owns some fossil fuel plants that were pushed down to the yieldco when it was formed. In fact, 43% of net generating capacity was from natural gas as of the end of 2015. These assets simply bring a different set of risks than other yieldcos carry, which can be good or bad, depending on what you're looking for as an investor.

TerraForm Power and TerraForm Global are wind and solar system owners that should have consistent long-term cash flows, but that's where the safety in those companies ends.

How conservative is the yieldco?
Conservatism in a yieldco isn't just about the level of debt it's willing to take on, it's also about their independence in buying projects from sponsors. That's one of the major complaints Hedge Fund Manager David Tepper had about TerraForm Power's involvement with SunEdison. The companies (and TerraForm Global) share executives, and the argument was that SunEdison used the yieldcos as a piggy bank, both selling assets when necessary and getting artificially high prices in the process.

NRG Yield has a close relationship with its parent NRG Energy, but it buys projects independently, and there haven't been outcries that it's overpaying for assets.

One thing that makes 8point3 Energy unique is its dual sponsor structure with First Solar and SunPower. Both companies have executives running the company and there's also an independent group of directors that sets prices for asset acquisitions. If one company tried to dump assets on the yieldco, the other sponsor, as well as independent board members, would scrutinize the deal.

What are the growth prospects for the yieldco?
Along with independence, yieldcos need assets to buy for growth. In the case of 8point3 Energy Partners, the company only buys assets from its sponsors, which could limit growth opportunities and could limit the ability to buy distressed assets opportunistically.

NRG Yield is probably the most flexible, buying assets from NRG Energy as well as third parties. As the renewable energy market goes into a time of uncertainty for new assets, that could create a buying opportunity the company can take advantage of.

Not all yieldcos are created equal
It seems like all yieldcos should be similar, but that couldn't be further from the truth. The biggest thing to understand is probably that sponsors matter a lot more than you might think on the surface. They control decision making, leverage, and often the assets a company can buy. The stronger and more independent the sponsor/sponsors the better. We've even seen that SunEdison's bankruptcy could have fallout for its yieldcos, even though they're independent companies.

Balance sheets also matter, because too much leverage can increase risks on a company's operations, especially if the market loses confidence in the sponsor (see SunEdison).

Right now, 8point3 Energy Partners and NRG Energy are among the top yieldcos in the industry and they have competitive advantages which were highlighted above. With dividend yields north of 5%, they're arguably great buys for investors in a booming renewable energy market.