Only one group of people wants this technology, and it's not gun buyers.

President Obama's executive order on guns issued in January directed the Departments of Justice, Homeland Security, and Defense to compile a report on how to jump-start the development of so-called "smart-gun" technology, supposed innovations that could reduce the incidence of unintended death from firearms.

Last month those agencies issued their report and came up with a road map for smart-gun technology to become a reality. The primary recommendation was essentially for law enforcement to determine the direction that enhancements would take.

Much of the gun-buying public has doubts that smart-gun technology such as that found in the Armatix Smart System IP1 could be an improvement in personal safety. Image source: Armatix.

By using the power of the purse (e.g., firearms purchases by police departments across the country), government could steer manufacturers in a certain direction. By recommending product improvements that would meet the rigorous needs of protecting both officers and the communities they serve, technologies might emerge that would make guns smarter and safer. 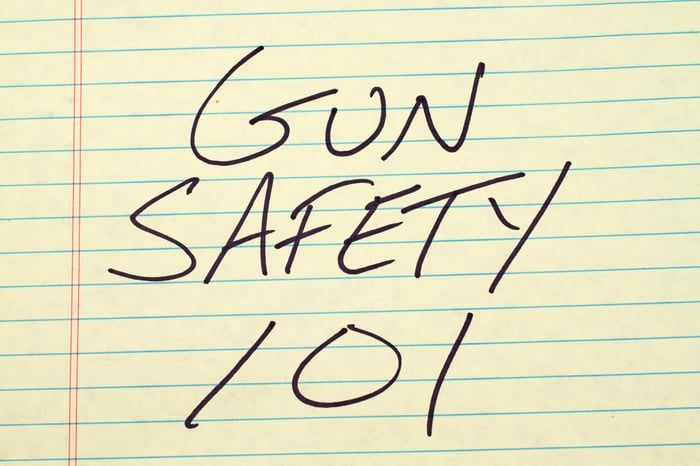 While figures for law enforcement sales by privately held Glock aren't available, the Austrian gun manufacturer estimates almost two-thirds of all law enforcement agencies in the U.S. deploy its firearms. SIG Sauer is another privately held gunmaker that enjoys a large measure of popularity among police departments.

Conversely, Sturm, Ruger (RGR -0.85%) has a negligible presence in police departments, though many individual officers will likely have purchased Rugers for personal use.

Although proponents have long agitated for the development of such technological advances, thus far they've been thwarted by two powerful forces. Neither one is the National Rifle Association, which is publicly agnostic about smart-gun technology, but in private is probably heavily opposed.

No, the reasons why smart-gun technology isn't a reality are that the gun-buying public doesn't want it, and the technology is flawed (which drives buyer opposition to it).

The problems with smart-gun enhancements are legion. User-authentication technology, for example, is especially problematic. Obama touted the potential for biometric recognition in his January remarks when he said, "if you can't unlock your phone unless you've got the right fingerprint, why can't we do the same thing for our guns?" But biometric recognition also eliminates a primary reason people purchase a gun today:  to protect self, family, and home. If a gun would be rendered useless to a spouse in time of need, a buyer would reject purchasing that gun.

Armatix is a German gunmaker that makes a .22 LR caliber handgun equipped with an RFID chip synced with a wristband. The gun becomes disabled if the chip is too far away from the wristband, a useful feature if the gun was stolen -- not so helpful if the owner needs to shoot but doesn't have time to first get the wristband. Moreover, wristbands need to be charged, and having a dead battery, or one without a sufficient charge in a time of crisis, means your gun is useless. There's also the potential for countertechnology to thwart your ability to fire a gun even if you meet all the conditions.

The technology all sounds good in theory, but in practical, real-world scenarios where someone needs to fire a gun, the technology might just thwart his or her efforts to do so.

Although we increasingly rely upon technology in our lives, we also know it's inherently unreliable. It may work in the vast majority of circumstances as intended, but when it comes down to a life-or-death situation, not many people want to put their faith in the "iPhone of guns." If a computer chip failed at that moment, it could render your sole means of protection a brick.

Gun buyers have said they don't want smart-gun technology, and have punished manufacturers that pursue it. Smith & Wesson faced a furious backlash from gun owners who boycotted its guns when, in 2000, it signed an agreement with the Clinton Administration to explore smart-gun technology. Colt Industries faced a similar boycott when it developed the Z-40, which contained an RFID chip and a wrist transponder.

The people most not wanting to be lab rats in this test are the police. The Fraternal Order of Police told Politico, "Police officers in general, federal officers in particular, shouldn't be asked to be the guinea pigs in evaluating a firearm that nobody's even seen yet." Certainly when confronted with an armed suspect, it's not the time to worry about whether your department's smart-gun purchase was a really dumb decision.

The marketplace has spoken on the issue and has largely rejected the technology. Gun buyers don't want it, most manufacturers see no future (or profit) in it, and the police don't want to be test dummies for it. Mostly the people pushing for smart-gun technology are those who ultimately want to ban guns, and that creates a chasm of distrust so wide that no amount of money thrown into research will narrow it.