For several years now, the U.S. Navy has been hard at work learning how best to build an underwater aircraft carrier. At long last, they may have found their solution -- albeit a small-scale solution -- and AeroVironment (NASDAQ:AVAV) is the company that will provide it.

Last week, AeroVironment confirmed that the Navy intends to deploy its new Blackwing unmanned aircraft system (so new that it doesn't even show up on AV's website) across its fleet of both manned, and unmanned, submarines. And it's important to distinguish this announcement from the constant stream of "technology demonstrations" that come out of the military-industrial complex.

This isn't that. This is an actual deployment. 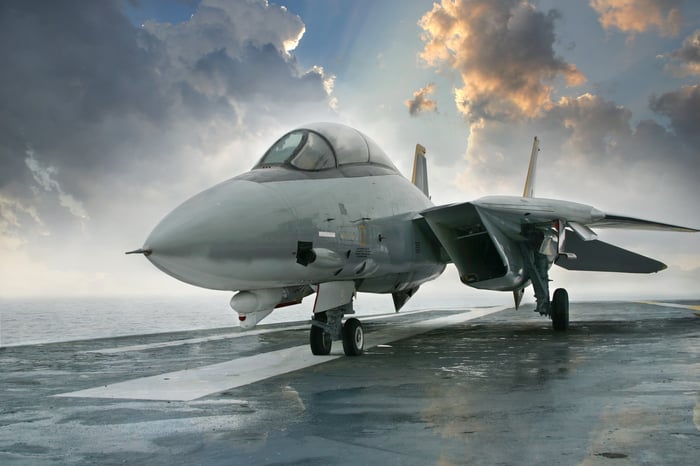 This news is "AWESUM"

Development of the product wrapped up last September, and the Navy quickly issued "a strong recommendation to transition the capability into the fleet." So this appears to be an active weapons program that should quickly begin adding money to AeroVironment's revenue stream.

Exactly how much money are we talking about? That's hard to say. AeroVironment publishes no details on Blackwing on its website, but the company does describe the UAV as similar in form and function to its Switchblade kamikaze UAV. The key difference is that while Switchblade launches from a man-packable tube the size of a small mortar, or from a 70mm rocket tube  such as Army helicopters carry, Blackwing launches "from a fully submerged undersea platform " such as a naval submarine or miniature drone sub, probably exiting via a torpedo tube .

AeroVironment is particularly coy about divulging Switchblade's cost. Estimates range  from $40,000 per unit to as high as $150,000, though. My own estimate implies a unit cost of at least $70,000, and perhaps more. So with AeroVironment announcing "full deployment" of the system across the Navy's fleet of 71 submarines (and an unknown number of drone subs), we're talking $5 million minimum here , times however many Blackwings the Navy decides to load onto each submarine.

To put that number in context, S&P Global Market Intelligence figures put revenue from AeroVironment's unmanned aircraft systems division at $221 million annually. So you see how, for a small company like AV, even a $5 million contract has the potential to "move the needle" on revenues pretty significantly.

As for how drastically the needle swings, that's something we don't know yet. But rest assured: We'll keep a close watch on the Pentagon's daily digest of contract awards and update you as soon as the first contract rolls out. As soon as we know more, you'll know more.