Please ensure Javascript is enabled for purposes of website accessibility
Log In Help Join The Motley Fool
Free Article Join Over 1 Million Premium Members And Get More In-Depth Stock Guidance and Research
By Daniel Miller - May 22, 2016 at 9:44AM

Here's a fun fact if you haven't heard it before: 88% of Fortune 500 companies from 1955 were gone, merged, or contracted by the time the book was closed on 2015. Think about that. Only a meager 12% of companies survived those six decades because of mergers as well as pressure from innovative companies disrupting industries and markets. While your portfolio can succeed with only a few big winners over a long period of time, it's just as important to pick as few big losers as possible.

With that said, two stocks to absolutely avoid, in my opinion, are Dr. Pepper Snapple Group (DPS) and Office Depot (ODP -3.53%).

Wrong side of the trend

Dr. Pepper Snapple has a few things investors love to see, including some widely recognized brands such as 7UP, A&W Root Beer, Sunkist and, of course, Dr. Pepper and Snapple. The company has also focused on improving its operations, and it very efficiently manages its inventory turns, which have helped improve its profitability despite a stagnant top line. Consider that Dr. Pepper Snapple's revenue has increased a meager 10% over the past eight years since its spinoff. That's not a compound annual growth rate you'll see investors leaping over one another to get their hands on. That stagnant revenue is a signal that the company finds itself battling changing consumer preferences.

As more and more consumers become health conscious, it's putting companies like Dr. Pepper Snapple on the wrong side of a trend that doesn't appear to be slowing down. Because of a more health-conscious U.S. consumer, soda consumption per capita has consistently declined over the past decade in the U.S. market. That's a bad thing when you consider that Dr. Pepper generates more than 80% of its revenue in the U.S., and its noncarbonated portfolio of drinks make up roughly 18% of the company's volume, according to Morningstar.

Even worse, 12% of the company's 2015 sales were to one customer: Wal-Mart. Investors who deal with Wal-Mart, or have ever shopped there, understand the retail giant's pricing power, which limits Dr. Pepper Snapple's leverage and ability to increase prices and margins.

Ultimately, while Dr. Pepper Snapple's operations are excellent, it faces so many headwinds that it's hard to imagine the company beating the market going forward -- despite having done so over the past decade. Consider that its growth is limited thanks to its No. 3 rank in the carbonated beverage industry -- behind Pepsi Co. and Coca-Cola -- in a U.S. market that continues to drink less of said beverages, to boot.

The retail struggle is real

It hasn't been an enjoyable couple of weeks for Office Depot after a U.S. federal judge ordered the deal between the company and competitor Staples (SPLS) be temporarily halted because of antitrust concerns -- forcing the two companies to abandon the merger. 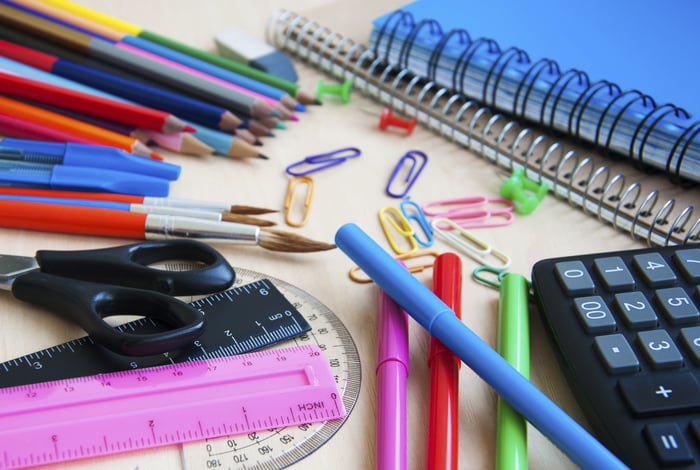 That leaves Office Depot, fresh with $250 million from Staples thanks to the failed merger, working with Bain & Co. to conduct a strategic review of its business -- which is a fancy way of saying "please help -- save us." Office Depot was able to extend its asset-based credit line for five more years with the $1.2 billion line maturing in 2021.

But none of that covers up how badly Office Depot needed this merger, and after the ruling hit the news feeds, the company's stock price abruptly plunged 40%. Office Depot's revenue declined by 10% in 2015, dropping from $16.1 billion to $14.5 billion, and that revenue figure is expected to sink by nearly another $1 billion in 2016 down to $13.6 billion. That pressure was felt on the bottom line last quarter as well, with the company's adjusted operating income dropping 15% compared to the prior year.

Even worse for investors is that Office Depot carries more debt than rival Staples, despite being the smaller of the two companies, which will make it increasingly difficult to fund its turnaround ambitions. Not only that, but the fact is, demand for its office goods are simply in decline, and there's competition from not only Staples -- now that the merger has failed -- but online retailers such as Amazon.

There's a fine line between being a value investor and catching a falling knife. That's how Office Depot appears to me: a falling knife to avoid as demand for its products remains weak and it maintains no clear strategy to take on its competition. Dr. Pepper Snapple, on the other hand, has continued to warrant a fair multiple for its stock price, but with growth stagnant and a business on the wrong side of the health-conscious movement, it doesn't seem like a future winner for investors.