What: It's been a wild year for investors in MannKind Corp. (NASDAQ:MNKD), a biopharma focused on inhaled insulin drugs. The company's share price has been all over the map, but it's currently down by more than 28% since the start of 2016, according to data from S&P Global Market Intelligence. 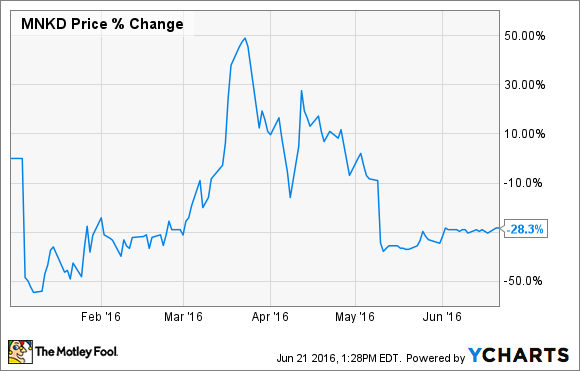 So what: MannKind has provided investors with a steady stream of news events that have greatly impacted its share price. Here are the key developments that investors need to be aware of:

Now what: Will MannKind's new strategy to turn Afrezza into a commercial success work? Can the company succeed where Sanofi clearly failed? Will the new strategy turn things around quickly enough to help the company meet its liquidity requirements?

Answering any one of these questions is impossible at the moment, which is creating a huge amount of uncertainty around this company's future. That makes MannKind's stock a highly speculative investment, so I'd advise potential investors to approach the company's shares with caution.

MannKind Corp. Shares Are Down 28.3% So Far This Year. Here's Why. @themotleyfool #stocks $MNKD $SNY Next Article
Current