Please ensure Javascript is enabled for purposes of website accessibility
Log In Help Join The Motley Fool
Free Article Join Over 1 Million Premium Members And Get More In-Depth Stock Guidance and Research
By Rick Munarriz - Updated May 26, 2020 at 11:51AM

You probably didn't get a party invitation, but Netflix (NFLX -0.98%) is blowing out 18 candles on its IPO birthday cake on Saturday. It was on May 23, 2002, shortly after the market opened, that the company behind the world's most popular premium streaming video service went public at $15 a pop. It was just a fringe player renting DVDs by mail at the time, and it was a broken IPO through most of its first few months of trading. The model thankfully evolved, and so did the wealth-altering impact of early ownership.

Netflix executed a 2-for-1 stock split two years after going public, followed by a 7-for-1 split in 2015. That brings the IPO price down to a split-adjusted $1.07, making the stock slightly better than a 400-bagger since its market debut. Put another way, investing $1,000 in Netflix when the stock was born would be worth $400,698.67 today as an 18-year-old adult. 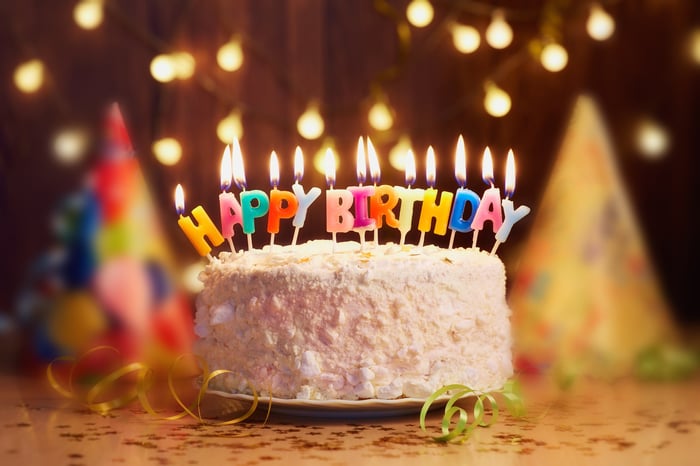 It's been a wild ride

I was one of the lucky investors to get in when Netflix was trading well below its IPO price later in 2002. I then made the colossal mistake of selling 80% of my position after the shares started moving higher a few months later. I've pruned my position down to just 5% of my original stake these past few years, and it's still by far my largest portfolio holding.

You don't need to kick me. I'm doing a good job of that myself. You can only imagine how I would have felt if I had sold my entire position. However, this isn't about me. This isn't my day. This is Netflix's party.

When Netflix went public 18 years ago, it had a little more than 600,000 members paying $19.95 a month to have three DVDs out at a time. Netflix still rents discs by mail to a shrinking audience that stands at just 2.1 million this year, but these days it's all about digital delivery. Netflix should have more than 190 million streaming subscribers worldwide by the end of next month. They're paying less than what folks were shelling out for what I'll just call Netflix Classic back in 2002, but this model is far more scalable and exciting.

Netflix obviously doesn't have to worry about footing postage both ways like it did in the old days with its streaming platform. Bandwidth costs do add up, but that's also was produces the kind of engagement that makes Netflix an essential utility in our lives.

At the time of its market debut, Netflix's biggest competitor was Blockbuster Video and then your nearest Redbox kiosk. Now Netflix is competing against whatever you used to watch at night, and it's winning that primetime battle.

Netflix is a beast. It was the S&P 500's biggest gainer in 2013 and 2015. It's moving higher for the eighth consecutive month, even as the global pandemic has rocked so many consumer-facing businesses.

It's not done, either. Like many high school graduates right now, this 18-year old has the whole world ahead of it. Happy birthday, Netflix. I'm so lucky to have held on to a piece of you through all of these years.

Editor's note: The date of Netflix's IPO has been corrected in this article.