Please ensure Javascript is enabled for purposes of website accessibility
Log In Help Join The Motley Fool
Free Article Join Over 1 Million Premium Members And Get More In-Depth Stock Guidance and Research
By Alyce Lomax - Updated Oct 5, 2018 at 11:54AM

Whole Foods just made a competitive lob that could hobble rivals like Sprouts.

Sprouts Farmers Market's (SFM -1.78%) heated growth looks appetizing after going public; conversely, Whole Foods' (WFM) reputation in the investment world has suffered due to competitive pressures. However, Sprouts lacks an advantage that would make it stronger for the long term. Whole Foods Market  still has it beat on an increasingly important metric: a values-based mission.

These have nothing to do with price cuts, but have to do with building purpose in its business -- and the world. 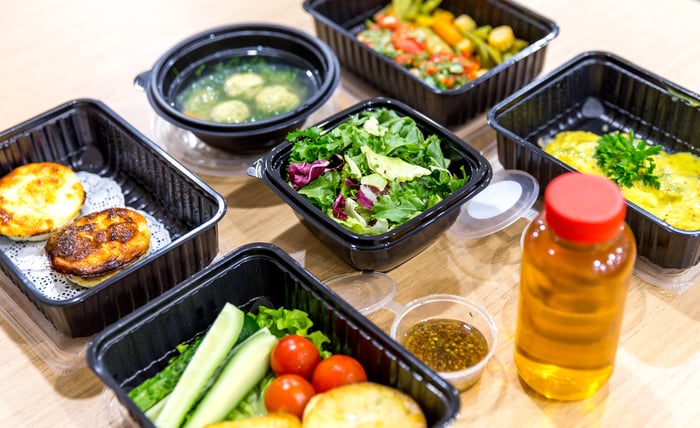 Many consumers haven't caught on that Whole Foods represents issues more and more people care about, such as sustainability, local farm products and suppliers, animal welfare, and labeling transparency. You're going to be able to find plenty of gluten-free, vegan, GMO-free, and other food choices you want or need to make.

It's not just about the products on the shelves. Whole Foods has a radically egalitarian culture that can't be beat. Employees are paid far above your usual retail worker. Most stock options are granted to rank-and-file employees, not top management. There is no penthouse office, and executives' salaries are capped at no more than 19 times the average employee. Decentralization allows its Team Members to work hands-on instead of following distant orders from the top down.

Years ago, these types of policies looked esoteric -- even more, investors often saw them as value destroying ideas. Whole Foods has instead been an amazing long-term stock holding. It's increasingly clear that providing goods people feel passionately about matter, and matter deeply.

Other than price on a hot, emergent niche, Sprouts lacks the rest of the holistic, big picture.

Where Sprouts falls dangerously short
Granted, Sprouts probably does represent a serious threat to some grocers on a few levels. It can meet Wal-Mart (WMT 0.80%) head to head in this area, since Sprouts' reputation centers around low-priced organic and natural goods. Wal-Mart, on the other hand, viewed the opportunity in organic, but certainly couldn't convert its whole store to that area. Authenticity was always a thing that consumers would find lacking in Wal-Mart's organic food strategy.

When it comes to growing organic market share, though, companies like Sprouts will have a harder time winning the ultimate war against Whole Foods.

Last year, I couldn't find much focus on sustainability on Sprouts' website in a post-IPO analysis, although it did highlight its work in charitable giving in communities. However, that's not exactly a new idea in grocery retail; Whole Foods has been doing that for ages, and many conventional grocers use such initiatives in their corporate social responsibility plans. It's a great thing to do, but it's not novel.

Sprouts has a page dedicated to "responsible retailing." While it addresses talking points, there are few details other than amorphous goals. It's in the process of setting standards for sustainable sourcing, ethical treatment of animals, and other considerations, all things Whole Foods has been doing as part of its overall mission for a very long while. Sprouts aims to reduce waste generated through its stores. Its goal is to cut its environmental footprint. (Emphasis mine in all cases.) Every point has been built into Whole Foods corporate DNA.

Of course consumers can and should applaud companies working to improve big problems like hunger. However, it seems as if intention to work on the other components are post-IPO afterthoughts. Companies that are behind in tackling such initiatives have an extremely long climb compared to those that paved the way to begin with.

Whole Foods' overall score is 3.7, an extremely good score in the retail industry, where happy employees are notoriously difficult to find. Most employees approve of co-CEOs John Mackey and Walter Robb, and 75% would recommend that friends consider working there .

Sprouts, on the other hand, is a lowly 2.7. Only half of the employees who have rated and reviewed it on Glassdoor approve of CEO Doug Sanders. Only 36% would recommend it to a friend. How Whole Foods jabbed rivals like Sprouts this week
There are reasons Whole Foods' stock has gotten a beat down. Its revenue has recently slowed down, depressing its stock price as investors proliferate a negative feedback loop. Actually that means Whole Foods shares are cheaper than they have been for years.

Still, it's a crown jewel in the business. Although Whole Foods has revealed that its gross margins won't continue to be as high as they have been over the last several years, its margins are simply amazing; according to Capital IQ data, last year's 35.8% gross margin leaves most grocers in the dust. It's profitable and has steadily increased net income. It even offers a dividend .

Sprouts' revenue and profit growth is absolutely impressive over the last several years (although revenue has been slowing). Meanwhile, its margins lag in comparison to Whole Foods, at 29.7% in the fiscal year ended 2013 .

In a huge competitive jab, Whole Foods is getting the word out about its mix of premium, mission-based products and forward-looking social and environmental focus. The grocer's TV ad campaign, as covered here by the New York Times, will raise a lot of awareness.

Mixing this with more word about Whole Foods' competitively priced products such as its 365 brand should prove a strategic one-two punch. It has plenty of leeway to drop prices on some products to bring in budget-minded shoppers who care about big issues, and there are plenty who would love to vote with their dollars but are afraid they simply don't have the money to do so.

There's something very different at the heart of Whole Foods' strategy, and it will be difficult for rivals to catch up. A heartfelt strategy makes for one heck of a big market opportunity right now. This isn't as difficult a contest than many investors think.