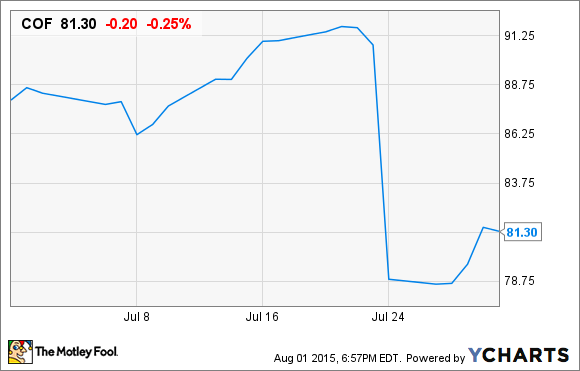 Shares of banking institution Capital One Financial (NYSE:COF) dove by more than 8% in July based on data from S&P Capital IQ following a surprisingly weak second-quarter earnings report.

For the quarter, Capital One Financial delivered $863 million in net income, which when adjusted for one-time costs and benefits worked out to $1.78 in EPS. Comparatively, Capital One reported an adjusted profit of $2.04 in the year-ago period. Wall Street had been looking for a more robust adjusted profit of $1.97 per share, so the company missed the mark by a long shot. This was the third time in the past four quarters that Capital One had whiffed come earnings time.

What was the surprising culprit of Capital One's miss? Primarily Capital One's provision for credit losses, which spiked 21% to $1.1 billion. Higher provisions are typically seen when delinquencies and nonperforming loans are on the rise. We saw this occurring in Capital One's commercial loan segment, where its nonperforming loan rate tripled to 0.9% from a range of 0.31%-0.38% in the previous four quarters.

As my Foolish colleague Jordan Wathen noted following the earnings release, the catalyst that boosted Capital One's nonperforming commercial loans relates to lending exposure to the energy industry, which is facing weak oil prices, and to taxi medallions, which are falling in price because of outfits like Uber.

Additionally, non-interest expenses rose by nearly 10% to $3.3 billion, including a $149 million jump in salaries and associate benefits. With the U.S. economy back on track, banks haven't been shy about beefing up bonuses once again. Every so often these higher salaries and bonuses can come back to bite investors.

The $64,000 question that investors need to ask themselves here is whether this bad quarter was an anomaly or a reason to truly be concerned.

On one hand, Capital One Financial is relatively cheap at just 10 times forward earnings, and it's able to generate superior margins relative to its banking peers thanks to its heavy reliance on its credit card segment to drive growth. The idea being that as long as delinquency rates remain low, Capital One can outperform in a growing U.S. economy.

However, delinquency rates have been exceptionally low for years, and are expected, according to Capital One's management team, to return to normalized levels in the coming quarters. What this means is that it's likely there will be a rise in provisions for loan losses and constrained profitability. It also remains to be seen how an imminent increase in lending rates from the Federal Reserve will impact Capital One's business. Higher rates allow for an increase in interest-bearing income, but they may also come with adverse consequences to its delinquency rates.

For now, I believe the best course of action may be to stick to the sidelines and allow Capital One to work through its issues.