When Tesla (NASDAQ:TSLA) unveiled its futuristic Cybertruck on Thursday, critics mocked its appearance. "Tesla's Cybertruck is a jarringly angular stainless-steel-bodied behemoth that looks like it escaped from the set of a dystopian sci-fi film," Motley Fool auto expert John Rosevear wrote at the time.

Many analysts predicted that rather than making it a legitimate challenger to Ford's (NYSE:F) best-selling F-150 pickup trucks, Cybertruck's nontraditional design would relegate it to becoming one of the auto industry's niche products. But judging by the surging number of early preorders for the radical electronic vehicle, these analysts might be underestimating demand for Tesla's latest creation. 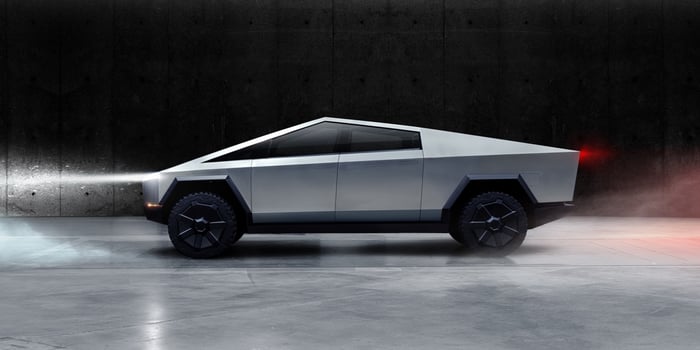 Tesla CEO Elon Musk tweeted on Sunday that Cybertruck preorders had reached 200,000. Musk said that figure is up from 187,000 earlier on Sunday and 146,000 on Saturday, suggesting that the number of preorders is rising rapidly.

Prospective customers must pay Tesla $100 to be among the first to obtain a Cybertruck. These preorders have therefore already raised $20 million for Tesla. It should be noted, however, that the preorder deposits are fully refundable and do not equate to sales of the vehicle.

Still, the surprisingly high number of Cybertruck preorders suggests that Tesla's marketing strategy is working -- and that the polarizing electronic-vehicle maker could sell far more of its gnarly new trucks than its detractors would have you believe.