Although Social Security isn't exactly "broke," as many people would have you believe, it certainly looks as if it's headed in that direction. Simply put, as more baby boomers retire, there will be more money flowing out of the program through benefits than there is flowing into the program through payroll taxes.

To help you understand why Social Security is unsustainable in its current form, here's one chart that sums up the problem, as well as some statistics that illustrate what it could mean to you.

Why is Social Security in trouble?

While Social Security funding is a little more complicated than I can explain in a paragraph or two, the basic idea is quite simple. Payroll taxes are collected on American workers' earned income, with half coming from the employee and the other half from the employer. Taxes are used to pay benefits, and any excess is funneled into the Social Security trust fund, where the money is then invested to build reserves and generate income to pay future benefits. If the obligations of Social Security in a given year exceed the incoming payroll taxes and investment returns, the remainder comes out of the trust fund, lowering its balance.

From 1974 through 2008, there were generally 3.2 to 3.4 workers paying into the system for every beneficiary collecting checks. However, the unemployment rate has risen in the wake of the Great Recession, and baby boomers are retiring en masse, driving the ratio of workers to beneficiaries down to 2.8 as of 2014. 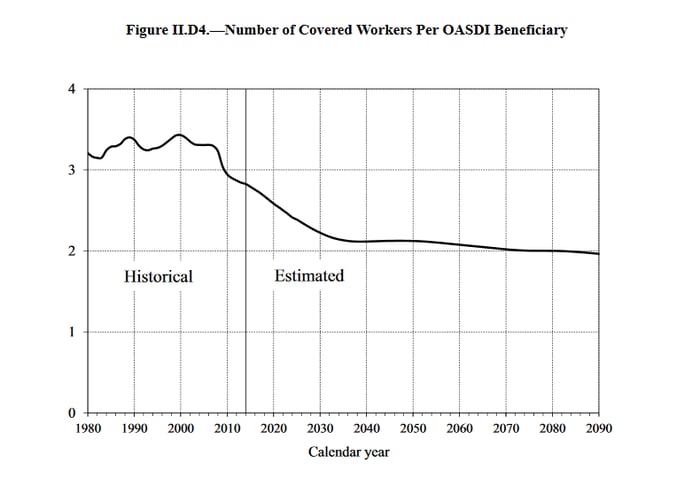 The worst is yet to come. The retirement of the baby boomers, combined with ever-increasing life expectancies, is expected to continue to push the ratio down until there are about two workers for every Social Security OASDI beneficiary.

In a nutshell, Social Security is in trouble because fewer people paying into the system means there will be less tax revenue available to pay promised benefits to future retirees.

What will it mean to American retirees?

The effect of this is that the benefits being paid out of Social Security will be greater than the payroll taxes coming in, and the gap is projected to widen over the coming years. Social Security's trust funds actually have a pretty solid reserve balance right now at about three times the minimum level for "short-term financial adequacy." However, the reserves are expected to decline rapidly in the years ahead.

In fact, the trust funds are expected to be completely exhausted by 2034. At this point, the incoming revenue from payroll taxes is projected to cover just 79% of scheduled Social Security benefits. By 2089, this will fall even further to 73% as a result of continuously longer life spans and the shrinking taxpayer-to-beneficiary ratio you saw in the first chart. 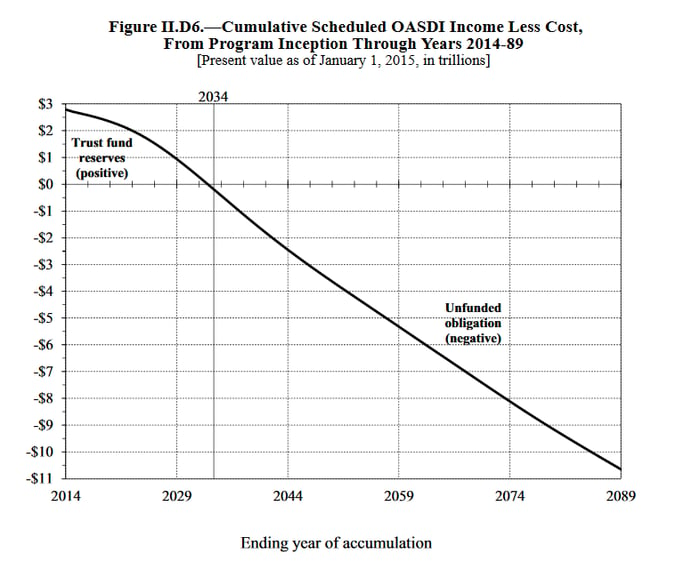 History tells us that something will be done to solve the problem; it's just a matter of what the exact solution(s) will be. Basically, it comes down to two choices: either raise taxes or cut benefits. There are many potential ways to do both of these things, and they vary widely in their effect on the funding gap and their level of support among the American people. For one thing, most Americans would rather pay higher taxes than have their eventual retirement benefits cut. Here's a thorough discussion of the different ways we could potentially make Social Security solvent.