Though working Americans have different ideas on when to retire, many regard their 60s as the ideal time to exit the workforce permanently. But while the average retirement age in the U.S. today is 63, current members of the workforce may have to kiss the idea of retiring in their 60s goodbye. In fact, many are already resigned to the fact that they'll need to work longer. A recent study by human resources consulting firm Willis Towers Watson reveals that almost 25% of Americans think they won't be able to retire until age 70 or even later.

This sentiment is consistent with Transamerica's latest retirement survey, which finds that two-thirds of baby boomers are either already working past age 65 or plan to do so. Furthermore, 40% are so convinced they'll need to postpone retirement that they're taking steps to maintain their skills in order to work past 65. 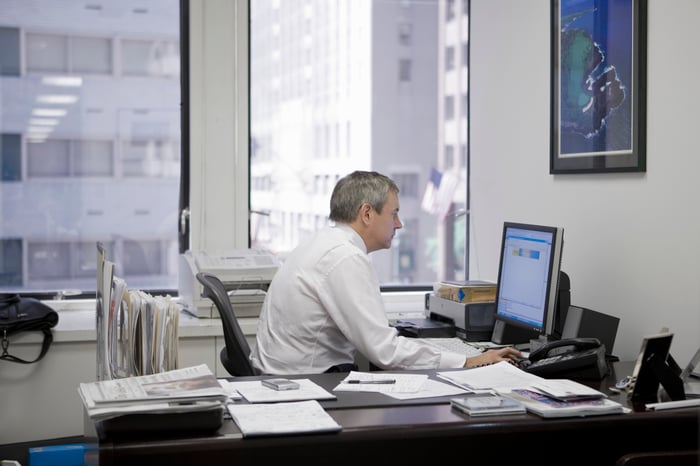 Now if you're thinking that the idea of working well into your 70s is crazy, ridiculous, or just plain wrong, here's some bad news: Unless you're extremely vigilant about saving, there's a good chance you'll wind up trekking to work for a decade longer than expected. The good news, however, is that you can increase your chances of retiring on time if you commit to saving early on.

First, let's get one thing straight: If your plan is to save the bare minimum for retirement and rely on Social Security to pick up the slack, think again. Social Security is only designed to replace about 40% of your pre-retirement income. If you're like most Americans, you'll need a minimum of 70% of your pre-retirement income to keep up with your living costs in retirement, and that's probably a best-case scenario. What this means is that if you fail to amass a decent chunk of retirement cash, you're likely to wind up working longer or struggling financially in your old age.

We've got some catching up to do

A big reason why so many Americans are coming to terms with the idea of working longer is that they know they're so blatantly behind on savings. In fact, an estimated one-third of Americans have no retirement savings whatsoever. And while older Americans who neglected their savings may have a harder time catching up, if you're relatively young and still have a few decades in the workforce ahead of you, it's not too late to change your fate -- but you do need to start now.

So just how much of a setback will you face by holding off on saving for retirement? Let's say you begin saving $200 a month at age 35, and that your investments generate an average annual 8% return (which is feasible for a stock-heavy portfolio). By the time you reach 65, you'll have roughly $272,000 to your name. Over the course of a 20-year retirement, that's about $13,600 a year, or just over $1,100 a month, to pay for your living expenses with Social Security hopefully covering the rest. But watch what happens if you wait 10 years to start saving. All other things being equal, instead of winding up with $272,000 by age 65, you'll have just $110,000. That's only $5,500 a year, or just over $450 a month, to cover your bills.

The following table shows how much money you'll wind up with in retirement if you start saving $200 a month at various ages:

Now keep in mind that these figures don't include investment gains in retirement, which could cause the numbers to go up. But the general point is that starting early gives you the greatest chance of retiring on time. These days, the average American retiree spends roughly $3,700 per month. Even if you take inflation into account, if you're able to withdraw $2,600 a month from savings (which you'd have in our most ideal scenario above) and supplement that income with Social Security benefits, you stand a good chance of being able to cover your living expenses without having to work longer. But the more you wait to start saving, the less likely you are to retire in your 60s -- or at all.

Of course, there are some benefits to working longer -- namely, that under the right circumstances, it could be good for your health. But if your goal is to retire in your 60s while you're young and healthy enough to enjoy your leisure time, then you'd better start saving some money. Immediately.

Are You Willing to Retire at 75? Here's Why You Might Have to @themotleyfool #stocks Next Article
Current