Please ensure Javascript is enabled for purposes of website accessibility
Log In Help Join The Motley Fool
Free Article Join Over 1 Million Premium Members And Get More In-Depth Stock Guidance and Research
By Maurie Backman – Oct 15, 2016 at 8:23AM

The good news: The college savings rate among parents is increasing. The bad news: Most families still have a long way to go if they're hoping to pay for college in full.

It's hard to leave college debt-free these days. Americans now owe a collective $1.3 trillion in student loans, with the average 2016 graduate racking up over $37,000 in debt. Now there is some good news for today's college hopefuls -- parents are doing a better job of saving for higher education than ever before. In fact, Fidelity Investments reports that 72% of U.S. families are saving for their kids' college costs -- a figure that's climbed 24% since 2007. Not only that, but 41% of families are taking advantage of dedicated college savings plans like 529s, which represents a 62% increase over the past decade. But while these are definitely steps in the right direction, given today's exorbitant higher education costs, most parents still have much catching up to do if they plan to pay for their kids' college degrees in full. 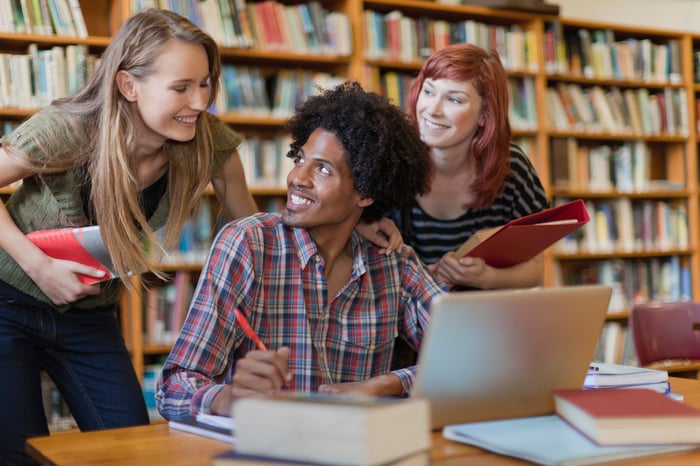 According to the College Savings Plan Network, the average 529 balance climbed just over 3% during the first half of 2016 to almost $21,000 -- a record high. But that amount is just a drop in the bucket given the price of a college education today.

And according to the College Board, room and board typically raises these costs by $10,000 or moreannually. What this means is that the average saver using a 529 only has enough to cover a little over a year of in-state college for a student planning to live on campus. Furthermore, it means that the average 529 saver who's amassed an otherwise impressive $21,000 couldn't even cover a year of out-of-state tuition at a public university. But while these numbers might paint a pretty bleak picture initially, if your child is years away from college, you have a good opportunity to catch up and save enough to make more of a dent in those tuition bills.

One major mistake families make when saving for college is sticking to a regular savings account. While it's a positive sign that over 40% of savers have embraced 529s, it also means that close to 60% have yet to take advantage.

Now there are some drawbacks to saving for college using a 529. Not only do 529s charge fees, but the money you put in can only be used for qualified higher education costs. So if you manage to save more than you end up needing to spend on college, you risk incurring a 10% penalty on your excess savings (though thankfully this penalty only applies to investment gains, not your principal contribution). On the other hand, 529 plans allow your money to grow tax-free, and their returns tend to be considerably higher than those offered by savings accounts.

Of course, 529s aren't for everyone, but there are other effective college-savings tools out there that offer more opportunity for growth than a standard savings account. You might consider investing via a traditional, non-tax advantaged brokerage account or opening a Roth IRA, which allows penalty-free withdrawals for higher education purposes.

One major challenge of saving for college is that you have a limited window to take advantage of compounding, which is the key to helping your balance grow. Assuming you don't start saving until after your first child is born, you have, at most,18 years before you'll conceivably need to use that money. And while 18 years is a decent chunk of time, some of us wait till our kids are older, thus narrowing that window even further.

Of course, we can't all start saving for college before our kids are even out of diapers. And we can't all save $200 or $300 a month, either. But if you save as much as you can, as early and efficiently as you can, you stand a greater chance of meeting or coming close to your goals.